Firefox 4 is still a long time away but some dedicated developers and designers are already at work to take the web browser to the next level.

One of the improvements that the developers seem to concentrate on is the look and feel of the web browser.

Some say this moves Firefox 4 nearer to Google Chrome and Opera. These browsers share some design elements, like a compressed menu button that contains most tools and options, or the removed title bar.

The major element of the mockup series of Firefox 4 seems to be the App button as he calls it. This is the same one-button approach that other web browsers have already implemented or started to implement.

The Firefox button in the mockup above is the App button that leads to all the menus that are usually found in the menu bar of Firefox 3.

Some users may argue that it is a waste of space to put the app button in single toolbar instead of placing it into an existing toolbar. The removal of the title bar would have barely any effect on the available screen estate otherwise. 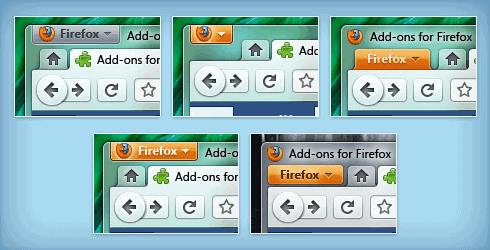 A visual comparison between the latest Firefox 4 mockup and the current Firefox 3 design shows that the developers aim to reduce the header area of Firefox by 40-50%.

Additional changes in the mockups include:

What are your thoughts on the new mockups of Firefox 4? Long needed changes or something that better remains untouched?

Martin Brinkmann is a journalist from Germany who founded Ghacks Technology News Back in 2005. He is passionate about all things tech and knows the Internet and computers like the back of his hand. You can follow Martin on Facebook or Twitter
View all posts by Martin Brinkmann →
Previous Post: « Autostart Firefox In Private Browsing Mode
Next Post: Firefox Mouse Zoom »