Alexander over at 4Sysops ran a benchmark comparison test of the encryption software programs Bitlocker and True Crypt on netbooks.

Bitlocker is the encryption software that ships with Windows 7 Ultimate and Windows Vista Ultimate, and newer versions of Windows, while True Crypt is a freely available Open Source alternative.

Both have features that the other software does not offer. Bitlocker for instance comes with a very handy Bitlocker To Go option (only on Windows 7 or newer). The feature can be used to encrypt a removable device, and put a program to decode the data on the same device. This allow you to decrypt the data on the device even if Bitlocker is not installed on the computer system the removable device is connected to. Note that this makes it possible to decrypt Bitlocker volumes on PCs running Windows XP or Windows Vista.

True Crypt on the other hand is open source and a cross-platform application which gives it the advantage if a user works with Windows, Linux and Mac systems. Also, TrueCrypt runs on all editions of XP, Vista, Windows 7 and newer versions of Windows.

The performance impact of both encryption software programs is neglectful on modern desktop computer systems. Netbooks, which are usually powered by Atom or Celeron cpus on the other hand, are not as powerful as desktop PCs.

I ran some benchmarks on an Atom N260 Netbook. For BitLocker, I chose three different encryption algorithms. For TrueCrypt, I chose only the fastest algorithm according to its built-in benchmark. 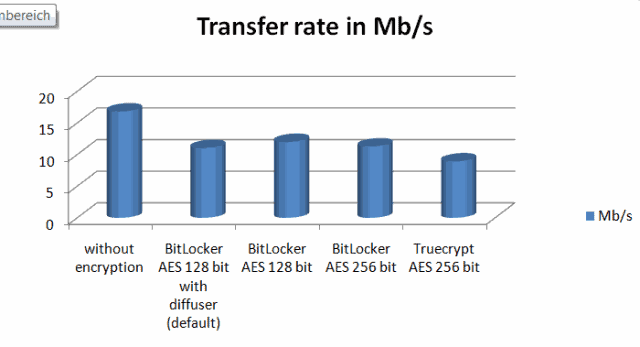 The second chart shows the performance loss compared to a system running no encryption.

True Crypt did perform not as good as Bitlocker in the test. The author did not fail to mention on the other hand that the difference in performance was not noticeable during tests. Alexander comes to the  conclusion:

As you can see, TrueCrypt performs worse. The default BitLocker algorithm (AES 128 bit with diffuser) is 12% faster. If you use the same algorithm in BitLocker and TrueCrypt, BitLocker is even faster by 14%. So switching to TrueCrypt in order to increase performance is a bad idea. But in defense of TrueCrypt I have to say that the difference is hardly noticeable; running encryption on a netbook makes it slow whether BitLocker or TrueCrypt is used.

To sum it up. Both security programs slow down netbooks noticeably but the difference in performance between the two programs is not noticeable even though it is existing. (via 4Sysops)