How To Manage The Windows 7 Boot Menu

The following guide provides you with instructions on managing the Windows 7 boot menu that you may see when the computer starts.

If you have installed Windows 7 on a computer system that was running a different operating system before, chance is that you now see that other operating system in the boot menu during startup.

There is not really a need for this unless you decided to go with a dual-boot system for some time. Users who completely switched to Windows 7 might want to remove the old operating system from appearing in the Windows 7 boot menu to speed up boot time, and avoid possible mistakes like booting into the wrong operating system.

Windows 7 users who want to remove, edit or add entries to the Windows 7 boot menu have two basic options. The first is available in form of the Msconfig utility that ships with every version of Windows 7. Msconfig might help but it can happen that it is not displaying the other operating systems as was the case with our Windows 7 Pro test system which we upgraded from Windows XP Pro.

The second and more reliable option is Easy BCD, a boot menu editor for Windows 7. 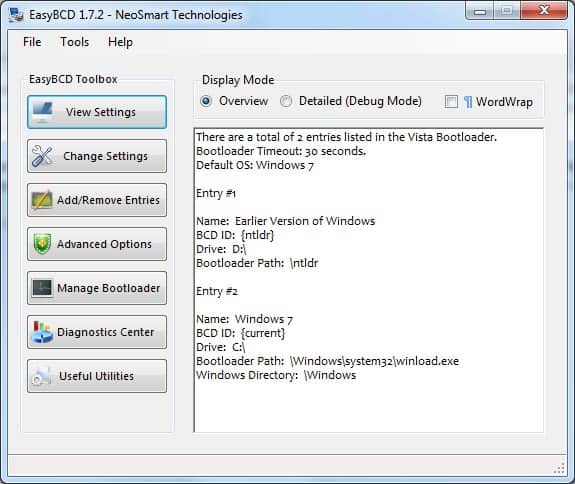 Note: Easy BCD is offered as a free non-commercial version, and a commercial version. The core difference is that you may not run the free Easy BCD version in professional or enterprise environments.. Also, registration is required before you can download the application.

The software program comes with the means to remove, edit and add operating systems in the Windows 7 boot menu.

It is for instance easy to remove an existing entry by opening the Add/Remove Entries menu in the program, selecting the operating system that should be removed and clicking on the Delete button.

The application does provide access to extensive settings ranging from configuring the bootloader timeout to advanced options like configuring DEP/NoExecute settings, debugging options or limitations to the cpus and physical memory. The boot menu manager offers a backup option so that the previous settings can be recovered in case of an emergency.

Update:Recent versions of Easy BCD support other features, they are for instance compatible with UEFI systems or Windows 10.

Easy BCD is exactly what the name implies, easy to use. It can be downloaded at the developer's website where it is available for all versions of Windows from Windows Vista onward.

The program is excellent, not only for bringing order into the boot menu of a PC, but also for other tasks such as creating a backup of the bootloader. The company offers another download, called EasyRE, on its website which is a boot environment which you can use to repair and recover a non-booting Windows PC.

Most users will use the program for dual-booting or creating a boot menu that lists more than two operating systems that are installed on the computer.