The Xbox Media Center arrived in 2004 and became popular so quickly that it became clear more ports would be needed. So the XBMC team allowed this tool to evolve into a cross-platform media center that would run on just about anything you can think of.

Note: XBMC is known as Kodi now. You find recent installation instructions on the official website.

But, of course, the purpose of this article is to install XBMC on Linux. Although XBMC can be installed on most Linux distributions, the Ubuntu installation is the least painful. I'll first illustrate the installation on Ubuntu and then on Fedora. Once installed, you will find XBMC meets many (if not all) of your media center needs similar to that of Windows Media Center.

Of course, ideally, you will want to install XBMC on a machine intended for multi-media use. It will work on lower-end video cards, but the interface will be somewhat slower. For a complete listing of supported hardware check out the XBMC hardware page. Now, let's get on with the installation.

I will give you a warning here: The most recently supported Ubuntu is 8.10. That does not, however, mean it will not install on anything later. I have XBMC installed and working fine on Ubuntu 9.04. With that in mind here are the installation steps for Ubuntu.

Save that file and then issue the command:

Once the update is complete issue the following command:

If you want to install extra skins, issue this command:

You will find the XBMC menu entry in the Sound And Video sub-menu of the Applications menu. When XBMC opens, you will see a very user-friendly interface (see Figure 1).

Now it's time for a less than user-friendly installation. Because there have been no rpm files created for Fedora, the installation requires some steps which will lead you to compile XBMC. These steps will work for Fedora 8, 9, and 10 as well as CentOS 5.2. Here we go. NOTE: You will need to be the root user for this installation.

If you don't already have Subversion install, do so now with the command:

Once Subversion is installed, check out XBMC from subversion with the command:

Now install the rpmfusion repository with one of the following commands:

The next step creates a symbolic link for the libmysqlclient.so file. The command is one of these two (depending upon your architecture):

Now cd into the XBMC directory (should be in the directory you are currently working in) and issue the following commands:

If you see an error related to jpegint.h, then you might have to issue the following command:

If you have to issue the above command, then issue the make command again.

And XBMC will install.

That's it for the Fedora/CentOS installation. You should find XBMC in your Video menu. If you can't seem to find a menu entry you can always enter xbmc in either a terminal window or the run dialog.

XBMC is an outstanding media center software. It will play your CDs and DVDs flawlessly. If you have the hardware for this software, it is a much better solution than most other Linux video solutions. 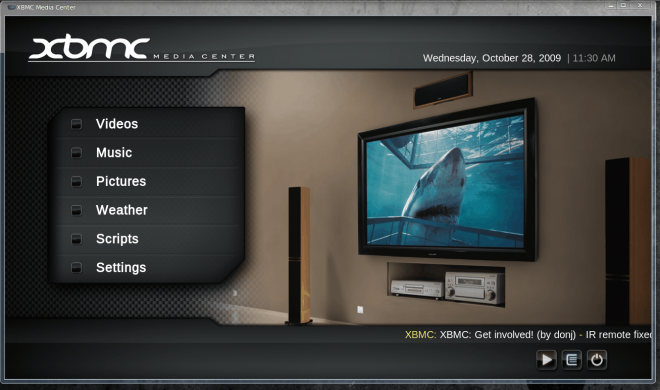