IBM recently announced they are pairing up with Canonical and Red Hat to develop a Windows 7 alternative (see "IBM Client for Smart Work"). This pairing makes perfect sense as IBM has been a supporter of open source and Linux for some time now.

Not only that but IBM released their office suite, Lotus Symphony, a few years ago. Back when this suite was released I did some technical journals on it only to find it difficult to install, rather buggy, and not well supported. That was then, this is now.

Now IBM sees a developing market for more cost-effective solutions to the Microsoft Windows/Office combination. This solution (for which I hope they find a better name than "IBM Client for Smart Work") will consist of:

The difference between the Red Hat and Ubuntu versions is quite interesting. On the Ubuntu side the Lotus tools will be doled out via cloud. On the Red Hat side all tools will be on the desktop. To me this is smart marketing because it brings both Linux distributions together to work on a single project, but doesn't pit each distribution against one another.

I believe that both of these solutions seems sound as well as outstanding alternatives to the current Windows environment. But what about the meat of the issue - the office suite? Does it work? Can it stand up to all the competition? This is where you decided. I will show you how this office suite is installed/used and you can kick those tires and see if it is a worthy opponent.

The first thing you need to do is go to the Symphony download page and download the version of the suite for your distribution. You will have to agree to a license as well as enter your name, email address, etc.

You can download for Windows, OS X, or Linux (Ubuntu, Red Hat, SuSE). The Ubuntu file will be a .deb file and both the Red Hat and SuSE files will be .rpm files.

Once you have downloaded the file you will open a terminal window, change into the directory containing the file, and issue one of these commands:

You will have to agree to a license during the install, but other than that the installation is a piece of cake.

Once Symphony is installed, you can start the suite from the command line by issuing the command:

Or you will find a menu entry in the Office sub-menu of the Applications menu.

You can not start the tools separately (reminiscent of the old Star Office suite) so when Symphony starts you will be presented with the Symphony desktop (see Figure 1).

From this desktop you can pretty much do anything you need. From creating a new file (click the icon associated with the type of file you want to work with) or open an existing file from the File menu.

I'm fairly confident that anyone reading this site can work their way around the basics of an office suite, so I won't go into the details of how to use Symphony. In later articles I will discuss some of the "power features" of Lotus Symphony.

If IBM plays their cards right they can take the Smart Work desktop and turn it into something that could seriously compete with Windows. This of course would be more in line with enterprise usage and not home/personal usage. I look forward to seeing how IBM continues their presence on the Linux desktop. 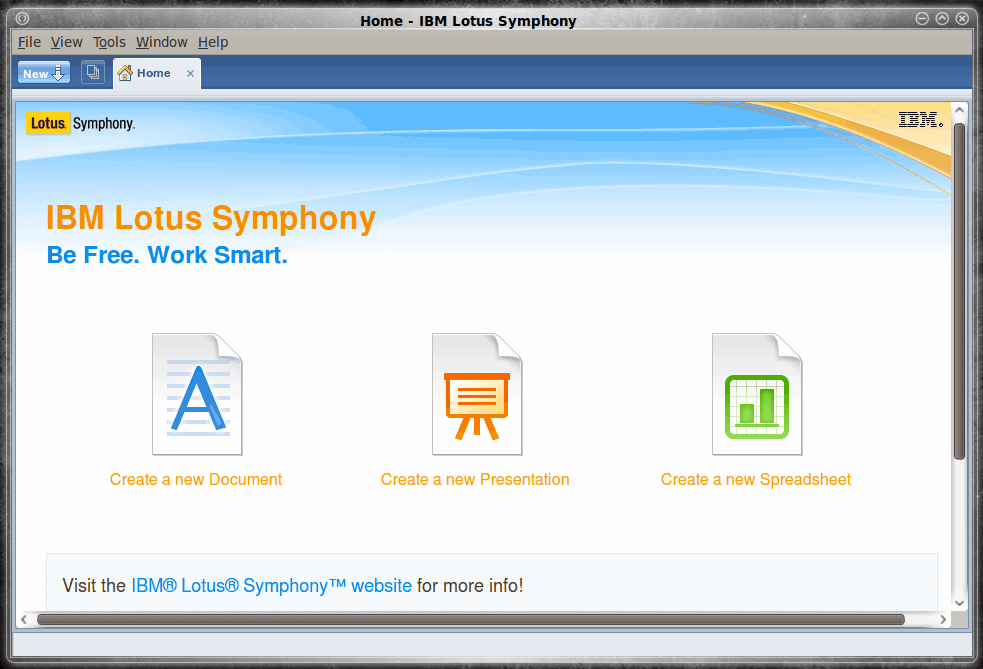 Article Name
Lotus Symphony on Linux: Install a part of "IBM's Smart Work"
Description
IBM recently announced they are pairing up with Canonical and Red Hat to develop a Windows 7 alternative (see "IBM Client for Smart Work"). This pairing makes perfect sense as IBM has been a supporter of open source and Linux for some time now.
Author
Jack Wallen
Publisher
Ghacks Technology News
Logo