The desktop email client Thunderbird does not offer different options to sort mail folders in a different way.

The only option users have is to make use of the A-Z order but that does not include special folders (like inbox or drafts) which will remain at the top all the time.

As the name implies it adds the option to manually sort folders in Thunderbird including all special folders.

But that's just one option; The other option provided by the Thunderbird extension is the ability to use Unicode characters in front of folders to put them on the top just like Gmail offers to do. 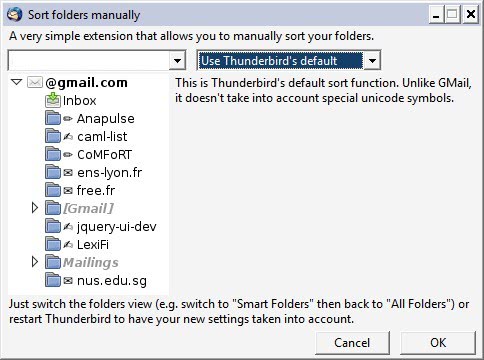 The string sorting option can be very interesting for users of webmail accounts that support Unicode characters like Gmail. The default sorting order in Thunderbird changes the sort order of the Gmail folder as Thunderbird does not use these characters in the sorting process.

The manual folder sorting on the other hand gives users of the email client versatile options to sort folders exactly how they should look like without having to care about a specific sort order.

It could take longer to sort but in the end it should be the most comfortable option for most users.

You can access the extension from the Tools menu after installation. The interface looks similar to the one you see on the screenshot above.

To start select the mail folder you want to change the sort order for. The default is always set to Thunderbird's default sort order. Switch that to "use a manually defined sort function" for options to change the order of folders manually.

This is done by selecting a folder first and using the move up or move down buttons in the interface to move it to another position. 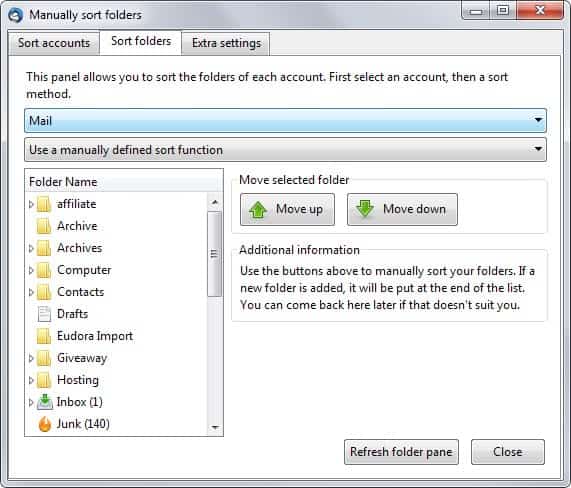 Update: The most recent version of the extension supports two additional features. The first enables you to select a startup folder. This is the folder that is selected by default when Thunderbird starts.

The second allows you to change the order of mail accounts in Thunderbird.

Manually Sort Folders is available for Thunderbird 3 and newer. It can be downloaded at the Mozilla Thunderbird website.

Martin Brinkmann is a journalist from Germany who founded Ghacks Technology News Back in 2005. He is passionate about all things tech and knows the Internet and computers like the back of his hand. You can follow Martin on Facebook or Twitter
View all posts by Martin Brinkmann →
Previous Post: « Spam filtering with Kmail
Next Post: Microsoft Outlook Temp Cleaner »