GoogleCrashHandler.exe will send anonymous usage data and crash reports to Google. It is an opt in service during installation of Google software products.

Your best bet to avoid its installations is to pay attention to the installation dialog when you install Google products on your system.

To find out if it is running in Windows press Ctrl-Shift-Esc on your keyboard to open the Windows Task Manager. According to Google GoogleCrashHandler.exe has the following characteristics:

GoogleCrashHandler.exe runs continuously on your computer if you've selected to send anonymous usage statistics and crash reports to Google for certain Google software, like Google Chrome. It helps send crash details to Google when your Google software unexpectedly shuts down. We use this data to help determine how to prevent these errors from happening in the future.

The process can be turned off in the installed Google program. That could be a bit of a problem if several Google applications are installed on the computer system. In Google Chrome - Google's web browser - you have to go to into the Options, switch to the Under The Hood tab and remove the checkmark in front of "Help make Google Chrome better by automatically sending usage statistics and crash reports to Google". 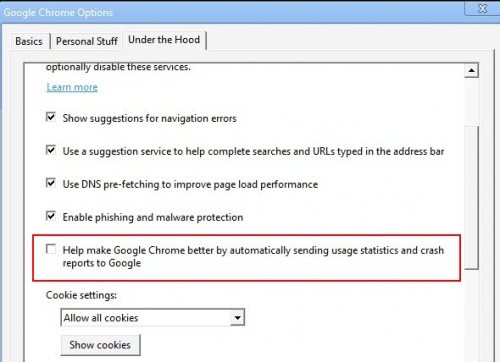 Google has revamped the Chrome preferences. In the new preferences, you have to click on show advanced settings and make sure that "automatically send usage statistics and crash reports to Google" is unchecked here.

Other Google applications have similar options. If more than one Google app is installed you need to go through all of them to turn off the crash reporting in all of them.

Once that is done GoogleCrashHandler.exe will not be running on the computer system anymore starting with the next start of the system (restart or kill the process for immediate effect).

If you have uninstalled all Google products and notice that the process is still running on your system, do the following to correct it: