Firefox, Internet Explorer, Google Chrome, Opera and Safari. Those are the five most popular web browsers on the Internet. If you would ask users to mention two more most would probably have difficulties answering the questions while others might mention Flock and Seamonkey (and probably Netscape). Seamonkey is a Mozilla project. It combines not only a web browser but also other Internet related apps under its hood including an email client, IRC client, newsgroup (Usenet) reader and HTML editor. That's an impressive list for one application and it could remind Internet veterans of the Netscape Communicator suite that also combined many of those features under the hood. Most might be surprised that Seamonkey, which is also known as the Mozilla Application Suite, is in fact based on source code used in Netscape Communicator. 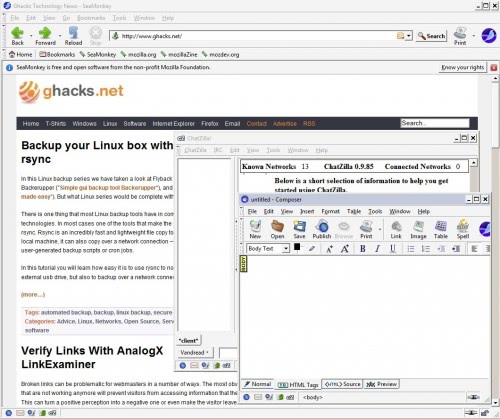 The first release candidate of Seamonkey 2.0 has been published on the Mozilla Seamonkey project page. Interested users can download the Internet suite for all supported operating systems (Windows, OSX and Linux) and languages. A page full of changes relative to the latest Seamonkey 1.0 stable release has been posted by the developers. The list is huge. Some of the noteworthy additions include session restore, tabbed mail, switch to the Toolkit backend used by Firefox, improved password manager and download manager, update of the Gecko rendering engine and dropped support for Windows NT 4, Windows 9x, Windows ME and Mac OSX 10.3.

Seamonkey is different from Firefox or Google Chrome as it integrates additional tools and features like an IRC chat client, an email client or HTML editor. It is similar to the Opera web browser in this regard which also comes with these features included.