Microsoft Will Upgrade Its Bing Search Engine This Fall

Twitter has been full of messages about Microsoft's coming upgrade of their Bing search engine. Most messages suggest a release this fall with some suspecting a release as early as the coming week. Only sparse information are provided about the changes that Microsoft is introducing in Bing 2.0. Some noteworthy ones are:

Silverlight powered Bing 2.0 on its way this month?: That's the message coming out of yesterdays annual company

It has to be noted that the tweets are coming out of Microsoft's company meeting which suggest that most original information are provided by Microsoft employees. Microsoft on the other hand did not officially comment on the messages that have been posted. 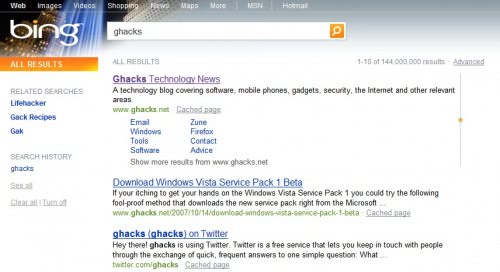 It is also unknown if the search result quality has been improved as well, or if only selected modules of the search engine have been optimized and improved. Guess we have to wait at least another week before we know for sure. What would you like to see in the new version of the search engine?