One of the major security threats that computer users face in the past couple of years are web browser exploits.

The nature of 0-day vulnerabilities make them highly dangerous. Companies have to identify these new vulnerabilities, analyze them, and create code for their products to render them ineffective.

While users and system administrators are sometimes responsible when it comes to vulnerabilities in browsers, if they don't update the browser quickly after security patches are released, it is sometimes the case that it takes hours or even days before security patches do get released.

This means that browsers remain vulnerable until a patch is released, and that users have to wait or seek other protective means to protect their data in the meantime.

Some plugins and add-ons help against these types of exploits and attacks. Notable is for instance the NoScript add-on for the Firefox web browser which disables scripts unless the user gives explicit permission. The problem with these exploits on the other hand is that they may run on trusted websites in the form of manipulated banner advertisement or after hacks. 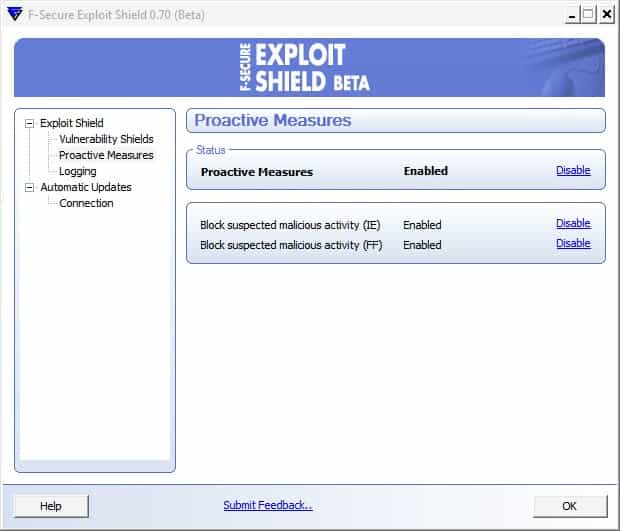 F-Secure Exploit Shield could be the solution against many of these attacks and exploits. The security software program, which is currently offered as a beta version for Microsoft's Internet Explorer and Mozilla Firefox, offers a vulnerability shield and proactive measures to protect computer systems against these forms of 0-day attacks.

Vulnerability shields offer patch equivalent protection. These are usually hotfixes created by F-Secure employees that protect against known web browser exploits. The proactive shield on the other hand uses heuristics to identify and block unknown or unidentified web browser exploits.

F-Secure Exploit Shield can be downloaded from the Labs section of the company's website. It is currently compatible with 32-bit editions of Windows XP, Windows Vista and Windows 7 and protects Mozilla Firefox and Internet Explorer web browsers on these computer systems.

Update: Exploit Shield has been integrated into F-Secure products. The program is no longer available as a standalone or as part of the beta program.

Martin Brinkmann is a journalist from Germany who founded Ghacks Technology News Back in 2005. He is passionate about all things tech and knows the Internet and computers like the back of his hand. You can follow Martin on Facebook or Twitter
View all posts by Martin Brinkmann →
Previous Post: « Block Spyware Websites With Inoculate
Next Post: Help the fight against phishing with Phishtank »