Another Report Finds Internet Explorer 8 To Be The Most Secure Web Browser - gHacks Tech News
ghacks.net

The report was sponsored by Microsoft's online security engineering team and a summary of it was later sent to marketing after the results were  published.

The test analyzed the web browser's phishing protection. Both Internet Explorer 8 and Firefox 3 (that is Firefox 3.0.11 and not Firefox 3.5) managed to score an average block rate of 83% and 80% during the 14 days of testing. Opera 10 managed to block 54%, Google Chrome 26% and Safari a whopping 2%. 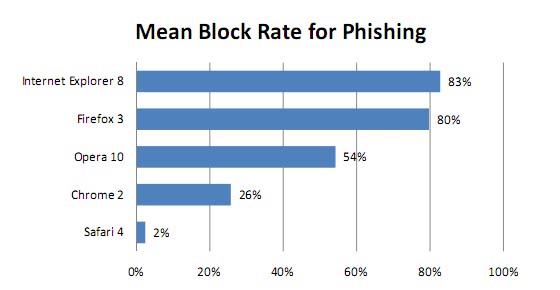 Many users will criticize the test because it has been sponsored by Microsoft. This alone should not be reason to dismiss the findings as inaccurate. There have however been accusations of manipulated reports by NSS Labs in the past which are for example mentioned on a blog post at the Opera website (no longer available).

Some of the points of criticism like mixing beta and final versions, or limiting test urls to a very low number are also valid points in the report.

Even critics have to admit on the other hand that Microsoft has made progress with Internet Explorer 8. The web browser might still not be as fast as the others but it is definitely a solid web browser which could be the most secure web browser when it comes to protecting users from phishing attacks. It has to be noted that the test is only considering the automated protection.

Martin Brinkmann is a journalist from Germany who founded Ghacks Technology News Back in 2005. He is passionate about all things tech and knows the Internet and computers like the back of his hand. You can follow Martin on Facebook or Twitter
View all posts by Martin Brinkmann →
Previous Post: « Improve Internet Eplorer 8 Speed
Next Post: Internet Explorer Application Compatibility VPC Image »