Peer Guardian is without doubt a popular security software that uses blacklists to block connection attempts to a computer system. Various blacklists are provided including those listing IPs of anti-p2p organizations, government and educational IPs but also adware and spyware servers. A problem that users of Peer Guardian experience are crashes and several other issues which can be mainly attributed to the fact that the security software has not been updated in the last two years.

Peer Block is a fork of Peer Guardian that tries to address these issues. It is actively developed and provides the same functionality (but with less problems) than Peer Guardian.

Users can download Peer Block from the official website. It offers a selection of IP blacklists that can be subscribed to. By default only the P2P blacklist is selected during setup. It is possible to select other blacklists which will then be updated at the first startup of the application. 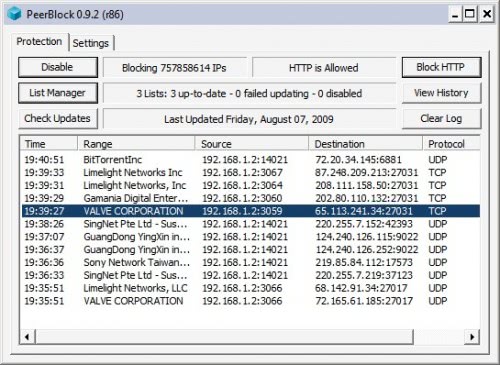 Regular updates of the blacklists are configured automatically with the option to change the frequency in the settings. The interface itself looks like the Peer Guardian interface.

Peer Block supports all popular Microsoft Windows operating systems including Windows 7, Windows Vista and Windows XP. It is the perfect alternative for users who are experiencing problems with Peer Guardian or prefer a software that gets updated regularly.

A new version of Peer Block has been released in the mean time. Check out our initial review of the application here.

Update: Note that Peer Block has not been updated in the past two years. The developer has posted an update on the project website a year ago stating that version 1.2 of the program was in development. It is not clear if and when the program will get released.