Blue screen errors seem to be less frequent than years ago when users were still running Windows 95 or even Windows XP. Blue Screens basically display an error message cause by an error that the Windows operating system could not handle. This can be faulty hardware drivers or software programs among other things. The only thing left to do is to write down the error code and restart or turn off the computer system.

The next step is to either check the computer hardware, change configuration settings in the bios or remove and update drivers in Windows. Users without a clue will most likely perform a search on the Internet for the blue screen error. This usually throws dozens of possible causes and solutions at them.

Blue Screen View is a portable software program for the Windows operating system that aids users in their research. It can scan all so called minidumps on a computer system so that it becomes possible to take a look at the blue screen error again in Windows. This takes away the need of writing down the information to be able to perform a search on the Internet. 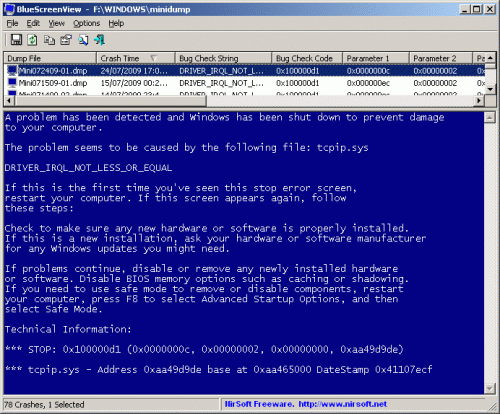 Blue Screen View does not only display the information already mentioned. It also aids the user by enumerating the memory addresses inside the stack of the crash displaying all drivers and modules that might have been involded in it. It will also display information about the drivers that are mentioned in the crash dump including product names and file versions. Another interesting option is the ability to analyse crash dumps from another Windows installation with the software.

Blue Screen View works with all versions of Windows including Windows XP, Windows Vista and Windows 7. The application can currently only analyse 32-bit dumps with the possibility that 64-bit dumps are added in a later version of the program.