Windows users have lots of choices when choosing applications and software programs for certain tasks.

This is especially true for popular tasks like reading RSS news, email or messaging.

A selection of fine online and offline computer programs are available that can be used to view RSS feeds. Some of the most popular include Google Reader, a web browser like Firefox that is capable of displaying RSS feeds or desktop rss readers like FeedDemon.

RSS Xpress is another desktop rss reader that does not come with the functionality of the latest version of FeedDemon but provides users with an optimized interface that looks like those of desktop email clients.

Users can import their feed lists from other applications right into the RSS reader which is available as a portable version as well. 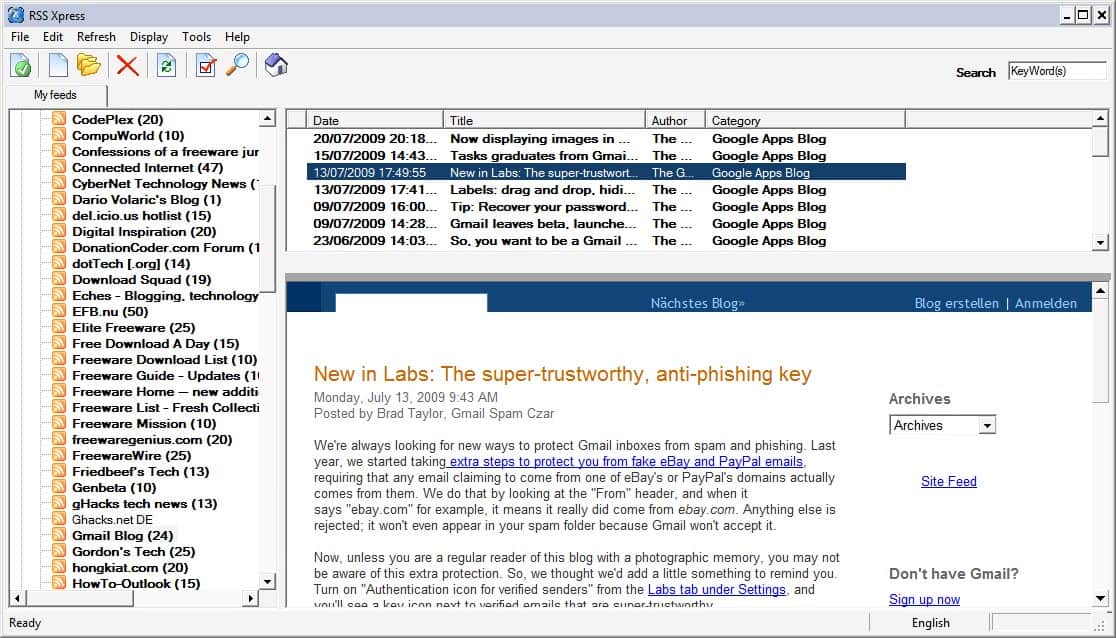 The feeds are displayed in the left sidebar of the application. They can be grouped in folders or listed as single feeds.

The top pane of the main window contains the feed titles of the currently selected feed or group while the lower pane the article. Some feeds are not displayed fully which is rather strange considering that they are displayed with their full text in other feed readers. It comes with filtering and notification options but stays pretty basic otherwise.

The main benefits of RSS Xpress are that it is available as a portable software program and that it is easy to use without all the advanced features offered by other feed readers. It does however require the Microsoft .net Framework 2.0 which is included in Windows Vista and later and should be installed on most Windows XP systems as well. Users who like advanced features might want to take a look at the latest FeedDemon beta version or Google Reader.

Update: RSS Xpress has been updated frequently ever since the first version of the program has been reviewed here on Ghacks. The last version dates back to July 2011 (as of March 2012).

Update 2: RSS Xpress is no longer available. The website returns a 404 not found error both on the product page and the homepage. I suggest you take a look at the two services listed above, or newer alternatives such as RSSOwl (requires Java), QuiteRSS or my current favorite Great News.