In this entry to the Linux Games department I am going to introduce you to a very fine RPG entry created by Basilisk Games called Eschalon Book I.

This game is one of the few full-blown RPG games available for Linux, Windows, and OS X. Eschalon Book I won the 2007 Indie game of the year and with good reason. It's well done.

Now this game isn't your standard, free, GPL fare. This game allows you to download a demo but to get the full blown fun you need to purchase the full version. The good news is that the full version will only set you back $19.95 for the download version. You can also purchase the CD version for $39.95. Believe me, this game is worth the price of the download version. Let's take a look and see why.

The feel of this game will take you back to the good old days of Ultima or Might and Magic. If you hearken for the days where game play and story were more important than 3D graphics, this is your game.

Playing Eschalon in Linux is simple. Download the demo file (or the full version if you have purchased) which will be a compressed tar file.  If you are using the demo you will have to execute the following commnads (we'll assume you are executing the command from within the directory the demo was downloaded to):

The final command will open up the Launch Menu where you can select your Graphic Renderer, Color Depth, and Screen Preferences (see Figure 1).

I prefer to run the game in Windowed mode but you might prefer a full screen option. Once you have chosen your options click the Start button to begin your game.

Once you have created your character you will be, like most good RPGs, tossed into your world waking up to see your world is not how you last left it.

The gameplay of Eschalon will take zero time to get used to for anyone who has spent any time at the helm of an RPG. As you can see, in Figure 2, the interface is clean and easy to use. You have the usual arsenal of spells, weapons, items, and more at your fingertips.

At the bottom of the screen is your story window. There is no voice acting to cause the game to seem hokey, so you will have to read to see where the story is going. The story window automatically updates for you so you will want to keep watch out for what is going on.

So far Basilisk Games has III books planned for the Eschalon series. I would encourage any Linux user longing for more games to purchase all three books to make sure Basilisk Games continues to develop for the Linux platform.

I have yet to complete the demo of this game. I am thoroughly enjoying my experience with the game and plan on purchasing the full version once I have completed the demo. And based on my experience with Book I, I will be purchasing Books II and III for Linux as soon as they hit the interwebs! Keep up the good work Basilisk Games! 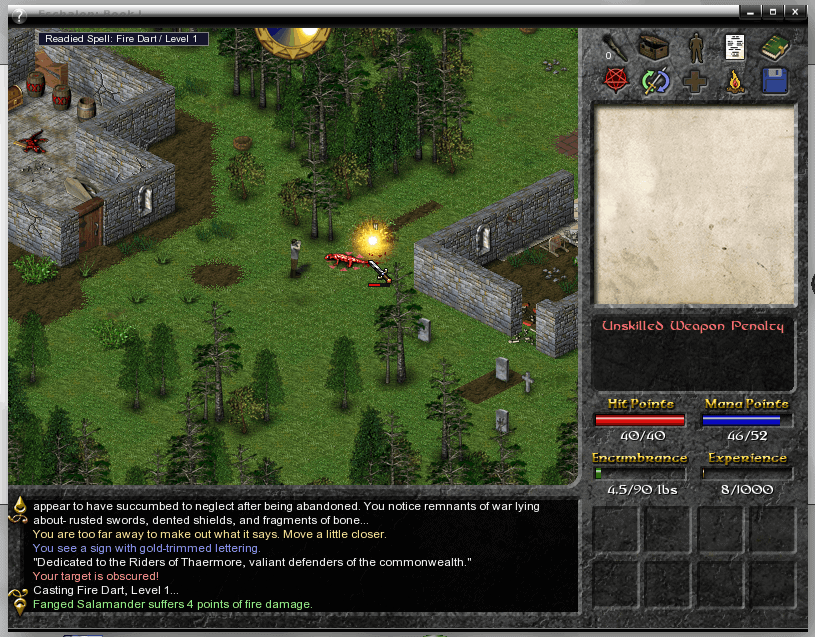