ChickenPing is the first recipe software that gets reviewed at Ghacks. Recipe software programs are definitely a niche product but can prove to be very useful if they come with an extensive set of features that make life easier. ChickenPing can be used to manage recipes on the computer system. But that would not be that spectacular without the additional features that make it an all in one solution. Users can add the contents of their fridge to the software which can then find recipes that make use of these ingredients.

Even better is the creation of shopping lists and the mobile version that is compatible with Windows Mobile Devices. 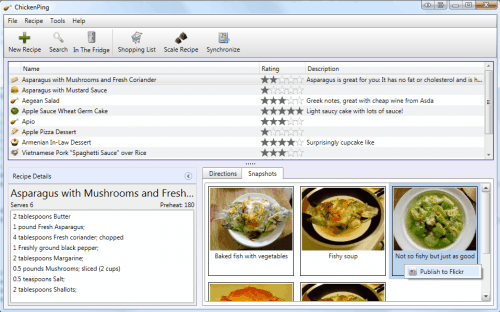 It is possible to add recipes manually to the software program or import them from RecipeML files, the most common recipe format on the Internet. Various websites provide access to recipe downloads which can then be comfortable added to the recipe software.

ChickenPing users can also export recipes to transfer them to another computer system or a mobile device. Recipes can be automatically adjusted by the program according to the number of users the meal is served for which removes calculation problems from the process. The new version that has been released recently now supports multiple recipe snapshots that can even be uploaded to Flickr (if you search for recipe on Flickr you know why this is a popular option).

A search is provided as well which can be used to search for recipes by name, category or specific ingredient. ChickenPing is a sophisticated free recipe software for the Windows operating system that can be a real asset for computer users who cook regularly.