On June 22, 2009 the domain sales service known as SitePoint split and changed their name to Flippa. Flippa's design is simplified compared to SitePoint although it still offers options to browse popular categories like established or premium websites. According to SitePoint, Flippa will offer a new search function that allows users to search for specific things such as minimum traffic. Flippa will also be featuring a statistics widget which will allow website shoppers to see quick stats about a particular site or domain such as the site's Google page rank or their uniques per month.

The changes don't come without a hefty price tag, however. Flippa will also be introduced with a new fee structure more expensive than SitePoint's previous fee structure. Flippa will be charging a "success fee" similar to eBay's final value fee. SitePoint has not yet announced whether or not they will be offering a marketplace for hosting, link sales, or scripts. User feedback made on SitePoint forums in regard to the change has been mostly negative. Many Twitter users are also spreading news of the change with retweets at the TechCrunch twitter account saying "SitePoint Spins Off Website Marketplace As Flippa, Upsets Users." 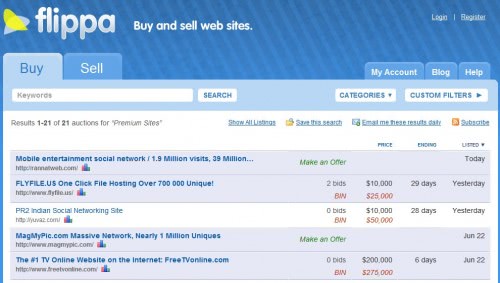 SitePoint co-founder, Mark Harbottle commented, "If you want to come across to flippa and sell your site in the professional marketplace weâ€™re creating for serious buyers, we welcome you with open arms. If not, please do go to digitalpoint. List your site for free and see if the old adage of â€œyou get what you pay forâ€ applies." This commented shocked and appalled many Digital Point users, many of which felt the remark by Mark Harbottle was "unprofessional" and that it was a "low blow" to the DigitalPoint.com webmaster community.

Mark Harbottle also commented, "Meanwhile while you all whine and complain about the fees, the design, etc. the smart sellers are listing their sites on flippa.com and they are attracting the majority of the buyer interest," which many SitePoint users found it not only hurtful for being called whiners and complainers, but also that this blow came after the announcement that fees will be rising. It came as a shocker that those who list their sites on SitePoint were insulted and told to leave if they don't like the changes. This change comes at a key period in the US economy where consumer spending has hit only one point higher than the US all time low