This article will concentrate on two lesser known free spyware removal tools. The first program is called Roguefix. It has been designed to counter so called rogue applications. The tool has been specifically designed to remove rogue scanners, desktop and homepage hijackers, trojans, codecs and miscellaneous malware.

Roguefix comes as a simple batch file that has to be executed in Windows safe mode.

The tool will then scan the operating system for spyware and remove detected spyware automatically from the computer system. The free spyware cleaner is only compatible to the Windows XP operating system according to the software developer.

SmitfraudFix on the other hand can scan a Windows XP or Windows 2000 operating system directly. The user needs to boot into safe mode for the removal process though. The program will generate a report after the scan which will list all the malicious files found after the spyware scan. 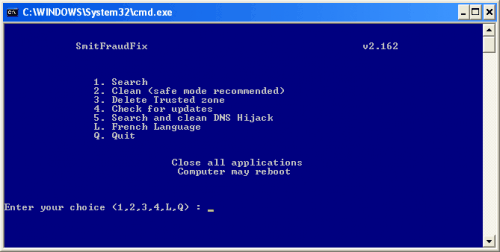 Both tools have been designed to detect and remove rogue applications only which does limit their usefulness in day to day spyware scans. It is however a good idea to have them at hand in case the computer system gets infected by rogue spyware.

Update: Roguefix has been discontinued, the developer site is no longer available. I suggest you take a look at Rogue Killer instead, a sophisticated program that can deal with many different rogue antivirus solutions that may have been installed on your system.