AppRemover is a free program for Microsoft Windows devices that allows you to uninstall antivirus software from the operating system.

The uninstallation of security software such as antivirus programs works pretty much like any other software uninstallation. While it works just fine most of the time, it can happen that you run into issues when you try to remove a security application from your PC.

Some antivirus companies have created special removal programs for that situation that will delete any file or Registry key of the software on the system to remove it completely from it.

We reviewed antivirus software removal tools in our overview not long ago and suggest you check it out for additional alternatives.

It is also possible to rely on third party applications like Revo Uninstaller which have been specifically designed to remove traces from any installed program on the system including files and Registry keys created during the installation or operation of the software.

A rather new option is the universal antivirus software uninstaller AppRemover which can remove dozens of security programs from a computer system.

Update: AppRemover is no longer available. You can download the program on third-party sites like MajorGeeks, but it is not really recommended as it has not been updated since 2015. A better way is to use the aforementioned Revo Uninstaller or comparable solutions instead. In case you wonder, Opswat, the makers of AppRemover, have integrated its functionality in the company's commercial Metadefender Endpoint Management application. End

The main advantage for users is that they do not have to hunt down the removal tool for the specific application (some developers offer several tools that only work with specific editions, or rely on it as it may not even exist).

The portable software program is compatible with Microsoft operating systems from Windows 2000 to the latest Windows 10 version (including 64-bit editions). It can be run right after download. It scans the computer system for security software programs it supports, and displays all that have been found in a list. It is possible to remove all or only selected ones from the system. 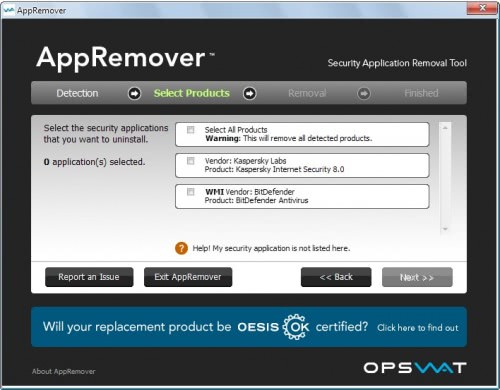 Antivirus and security software programs from many popular developers are supported by the program including applications created by AVG, Avira, F-Secure, Kaspersky, Lavasoft, McAfee, Microsoft, Panda, PC Tools, Sophos, Symantec and Trend Micro. It is very likely that the currently installed program is among the supported ones.

The AppRemover website lists all supported programs sorted by operating system. The page is a good starting point as you can use it to find out if the software that you want to remove is supported by the application. The latest version is available for Windows and Mac systems.

AppRemover is a nice to have program as it enables you to uninstall antivirus solutions and some other program types from the operating system in one go.