A tool that can flip the bit and should work with most usb flash drives is Lexar's USB format tool. It is a portable tool that has been designed for Lexar USB drives but it works with other brands as well.

The program has been designed so that you can partition USB Flash Drives after you have processed it using the program, but provides other features as well.

The main interface does not only provide an option to change the removable bit, but also to format the usb drive, set a volume label and add a bootable partition to the drive. 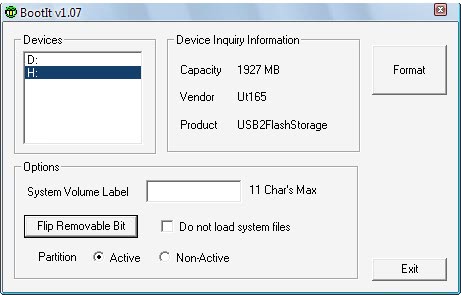 You only need to press the flip removable bit button if you want to prepare the flash drive for use with multiple partitions. The drive has to be removed and connected again to the computer system afterwards.

It should be noted that Lexar USB Format will not partition the usb flash drive which has to be done with other tools. For that you can use the build in tools in the operating system. Read Joshua's System Partitioning With Vista article to find out how to do that in Windows Vista. A more universal software is the gParted Live CD which can be booted from any computer system.

Another option to create multiple USB stick partitions has been discussed before at Ghacks. The process involves editing the Windows Registry and has the disadvantage that the add-on partitions are only visible on that computer system.

Lexar USB Format is a handy portable program for Windows that allows you to make any drive fixed so that it can be partitioned. This can be useful if you want to have access to multiple partitions on an USB Flash Drive, for instance to encrypt one and keep the other readable, or to separate data on the drive.

Update: Lexar USB Format is no longer available at its original destination. We have uploaded the latest working version of the product to our own servers. You can download it with a click on the following link: Lexar USB Format