Conficker Eye Chart is a free page on the Internet that helps you determine whether a PC is infected with a variant of the Conficker worm.

While the Conficker worm did not have the (significant) impact many assumed it would have on April 1, it is still a threat as millions of computer systems are infected with it.

We covered Conficker worm detection and removal instructions in March, and would like to provide you with the easiest way of detecting a possible Conficker infection on a computer system.

One of the characteristics of the Conficker worm is the blocking of url strings. This includes urls of antivirus companies, Microsoft websites, and support sites that can aid users in removing the Conficker worm from a computer system.

Users with the worm cannot open some websites in their web browser anymore, and this is the exact concept that the Conficker Eye Chart makes use of to determine whether a PC is infected with the worm.

It displays six images on the website of which three are from addresses that are not blocked and three loaded from urls that are blocked by Conficker.

If the web browser displays all six urls it is very likely that Conficker has not infected the computer system. If only the safe three images are displayed an infection with the C variant of Conficker is likely, while the display of four images hints at A and B variants of Conficker. 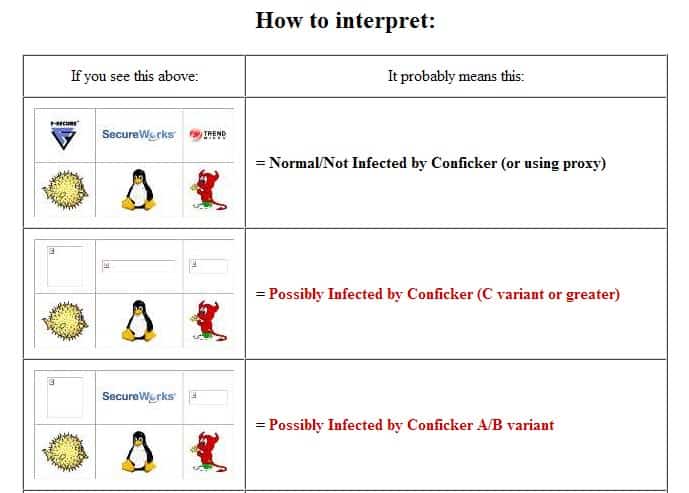 The major benefit of this Conficker detection test is its simplicity. It takes only a web browser and a few seconds to test if the computer system has been infected. It is still a good idea to confirm the findings by using a software detection program which you can find here.

Most security programs should identify the Conficker worm by now and offer to remove it from the infected system. I suggest you check out Malwarebytes Anti-Malware, a free program with a very good virus detection and removal track record in case you need a program to scan your system thoroughly.

So, the way you'd go about it is to first open the web page in question to check how many images are displayed on it. If a possible infection is the result, you need to download good security software that removes the infection from the system.

Martin Brinkmann is a journalist from Germany who founded Ghacks Technology News Back in 2005. He is passionate about all things tech and knows the Internet and computers like the back of his hand. You can follow Martin on Facebook or Twitter
View all posts by Martin Brinkmann →
Previous Post: « Conficker Worm Detection And Removal
Next Post: Home Video Surveillance System Utilizing Webcams »