Win Layout is a useful desktop management software like Maxto, Taekwindow or Freesnap which we have reviewed earlier.

The program adds several new controls to the Windows operating system that enable you to control windows in one way or the other.

The software program is fully portable and should run on most versions of the Windows operating system. The application places an icon into the Windows System Tray that displays several program options that you can make use of. 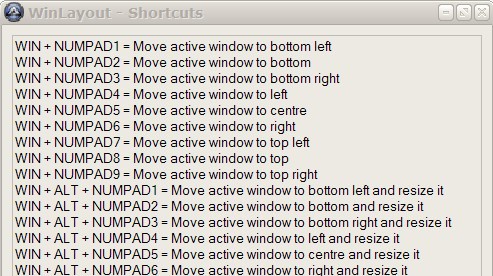 Win Layout adds 33 new keyboard shortcuts to the Windows operating system that can be used to manipulate open windows.

Most of the keyboard shortcuts make use of a combination of the Windows, Alt and CTRL keys plus a key on the numpad. The latter is problematic for laptop users as laptop keyboards usually don't ship with a numpad attached to them.

Pressing the Windows key plus the numpad keys 1-9 will move the active window to the corresponding corner of the Windows desktop for example; Win+Numpad1 moves it to the bottom left and Win+Numpad9 to the top right. It replicates the key layout basically which you may use as a visual reminder.

If you add the Alt key to that combination it will move the active window and resize it at the same time. Resizing will either change the size of the window to half or a fourth depending on the numpad key that you use.

Using CTRL instead of ALT with Windows and the numpad keys between 1 to 9 will snap the window to a corner of the computer desktop. The difference between resizing and snapping is the fact that the resizing shortcut will always result in the same window size while snapping windows will not.

The remaining keyboard shortcuts let you increase or resize the window size, and move the active window one pixel into a specific direction.

Win Layout uses roughly 6 Megabytes of computer memory while running. Not really lightweight but acceptable for users who use the software program extensively.

WinLayout, despite its age, offers better window controls than the newest versions of Windows. While you can use Windows-Left or Windows-Right to snap windows to the left or right side of the screen in Windows 7 and newer versions of Windows, no additional controls are offered.

Update: WinLayout has not been updated since 2009. While the project appears to have been abandoned by its author, it is still working fine on newer versions of the Microsoft Windows operating system.

Just download and run the program, and all of its functionality becomes available on the system. This was tested on a 64-bit version of Windows 7 Pro, but should be compatible with other versions of Windows as well.

To display the list of shortcut it makes available, click on the program's system tray icon after start.

The program homepage is no longer available. We have uploaded the latest release version of WinLayout to our own server. You can download the program with a click on the following link: WinLayout

The download includes the 32-bit and 64-bit program archive. Note that we don't support the program in any way.

Martin Brinkmann is a journalist from Germany who founded Ghacks Technology News Back in 2005. He is passionate about all things tech and knows the Internet and computers like the back of his hand. You can follow Martin on Facebook or Twitter
View all posts by Martin Brinkmann →
Previous Post: « Antivirus Firewall Software Leak Test
Next Post: Microsoft Outlook: Display And Save Email Attachments »