Media Player Connectivity is a Firefox add-on that can send embedded media to an external media player so that the media can be played externally. The add-on will perform a scan of installed media players after installation and associate them with various media types that it can send to them.

It is possible to configure these automatic settings manually in the options in case your media player did not get recognized during the initial scan. Several different media types like Real Media, Windows Media and Quicktime can be associated with an external media player. The add-on can also automatically recognize metafiles such as ram, rpm, wmv, wm, wma, asx, asf and send them to an external player.

The options of the add-on are quite extensive. Media files can be send and played automatically in an external player or on the user's request. This is configurable independently for each media type which makes the extension highly configurable. 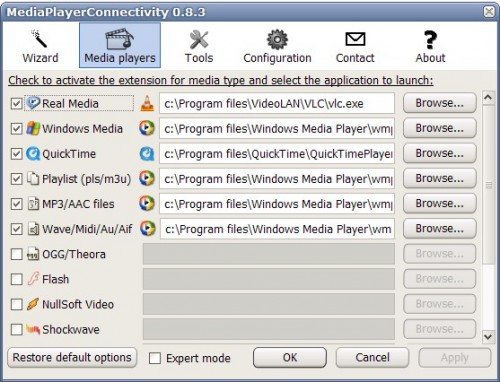 Not all websites are working with the extension. This could be a configuration issue or a choice of a not compatible media player. The extension worked out of the box at Apple's trailer website but not on Youtube.

Update: The Firefox add-on has not been updated since 2010, which may indicate that it may have been abandoned or put on ice by its author. While some or even all of its functionality may still be working, it is likely that users will eventually run into compatibility issues with the add-on as Firefox development progresses.

Judging by the user reviews on the official site, it is still working for some users, while others cannot get it to run at all anymore. Alternatives that you may be interested in are Firefox Play Link which lets you open videos in external players, or Flash Video Replacer which replaces the Flash players on site with alternatives.