Facebook Beacon is part of Facebook's advertising efforts. It is basically a cooperation with 44 partner sites who execute JavaScript code on their website sending specific user information to Facebook. Examples would be the popular gaming portal Kongegrate which send information about played games to Facebook, movie reviews published at Fandango or purchases made on eBay. User identification is done by the JavaScript code and a Facebook cookie.

Facebook Beacon has been heavily criticized by privacy advocates since its introduction. The main point of criticism is that users cannot opt out completely. While they can prevent that information from the 44 partner sites will be published publicly and accessible by friends they cannot prevent Facebook from receiving the data in first place. There is no opt out of the system other than blocking the scripts from being executed.

Facebook Beacon Blocker is a Firefox add-on that will block the Facebook Beacon service from collecting and sending information about the user to Facebook. It basically blocks the script from being executed on the partner sites which is all it takes to turn the service off completely.

Users with Firefox add-ons like NoScript can also prevent that the Facebook Beacon script will be executed by simply keeping it disabled in the options. 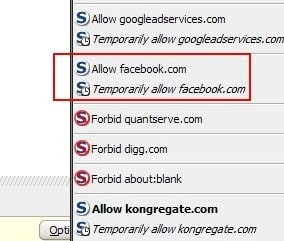 Lots of popular sites that use the service. Might be time to block the Facebook Beacon service if you use any of those listed above.