The Only Batch File Renamer You Ever Need

ReNamer is a very flexible portable batch file renamer that comes with powerful renaming options. It is possible to add multiple files or folders to the software program which are then shown in the lower half of the interface. One or multiple renaming rules can be added and put in order. A nice feature of ReNamer is that it will display the old name and the new name instantly after adding a rule to the batch file renamer.

Filters can be used to exclude or include files and folders. It is for instance possible to exclude hidden or system files from being renamed. Several different name manipulation rules can be added including adding, deleting, replacing or serializing characters.

Interesting is the support of various meta tag information that can be added to the filename. Supported are among others ID3, Avi, EXIF, IPTC, HASH and File information. This means that ReNamer can be used to rename photo, music or video collections with ease. 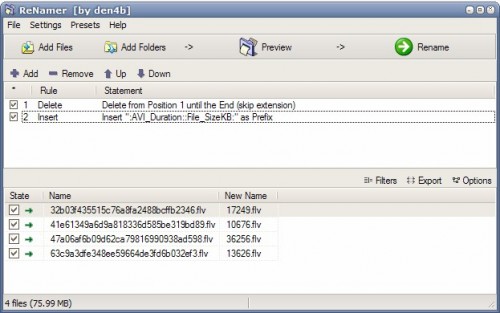 The screenshot above is demonstrating a basic renaming example. The first rule removes all characters with the exception of the file extension from the filename while the second rule adds the playing time and the file size as the name name for the selected files.

ReNamer can also be used to strip certain characters from files, cleanup file and folder names (remove brackets among other things) and transliterate non-English characters with English representations.

It provides furthermore access to regular expressions and Pascal Script for advanced renaming needs. Rules can be saved as presets that can be loaded into the application again at any time to perform the same renaming operations again.

The software is very responsive and definitely one of the best file renamers for the Windows platform.