Locked or open files are not only problematic when trying to delete them on the computer system. They can also be problematic when a user tries to move a folder with files or single files to a different location. One extreme example would be moving the Windows folder to another hard drive to replace the old one. Windows would not allow some files to be copied to the new destination.

Shadow Copy has to be installed on the computer system but can be run afterwards from the command prompt or by opening the graphical user interface. Running the tool from the command line will still open the interface after sending the command but it will require no user interaction unless errors occur.

Shadow Copy makes use of the Microsoft's Volume Shadow service which means that this service has to be running to work with Shadow Copy. Microsoft renamed the feature in Windows Vista to Previous Versions. The service provides the means to copy any accessible file without having to worry about if the file is locked or open. 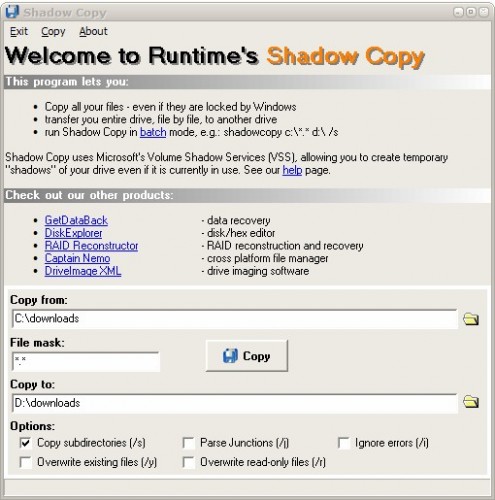 It is possible to copy the Windows folder to another location using the Shadow Copy software. Shadow Copy is compatible with Windows XP, Windows Server 2003 and Windows Vista. The software is portable as the installed files can be executed independently from the installation. (Tested after uninstalling the software)