There might come a time where you want to download some of the photos that you have uploaded to Flickr. Maybe you got a new computer or a new hard drive because the old hard drive crashed. Maybe you want to download all photos at your moms house to show them to her offline. Whatever it is there is no way to mass download or backup Flickr accounts from within the Flickr interface. Rich over at PCMenga discovered an easy way to create a backup of a Flickr account.

The software Downloadr is more than just a tool to backup Flickr accounts. It can perform a search for photos on Flickr using fulltext, users, tags, places, sets, dates, groups and favorites. It can display a maximum of 250 photos per page and download all selected photos at once.

Only Creative Commons photos are searched by default but that option can be disabled in the search form. The easiest way to backup Flickr accounts would be to enter the username and download all photos that are found. This is obviously only working if the user has made all photos publicly available. Private photos cannot be downloaded this way. 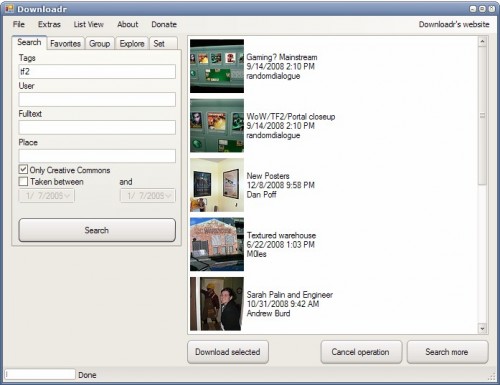 There is however another option to download all photos of a Flickr account. Downloadr comes with the means to authenticate a user. Once a user has been authenticated by providing his login details the function Complete Backup can be selected.

This option will download all photos from the authenticated Flickr account to the local computer. The pictures will be downloaded in one go and the program handles even large amounts of photos fine.