Windows XP users - or those with even older versions of Windows - who have the operating system installed on a notebook might have noticed that the battery meter icon in the system tray is not really the best way of displaying the current battery level. Hovering over it displays the information needed but that always involved moving the mouse into that area to find out about the current battery status of the notebook. Some hardware developers like IBM, well when they developed notebooks at least, included their own software programs for the matter which where usually bulky and resource hungry but provided you with better information.

A better notebook battery monitor is Power Meter Plus. The software is completely free for private use. It can be installed or used as a portable application and runs fine on all Windows operating systems prior to Windows Vista. So every Microsoft operating system that has been released after Windows 3.11 and before Windows Vista should be able to run this little application without problems.

Power Meter Plus will display a battery monitor in the left and / or right corner of the computer screen. That power meter appears gradually over time as the power levels drop and will be more prominent the less it gets. The meter will automatically move to the left or right side of the screen depending on the position of the computer mouse. 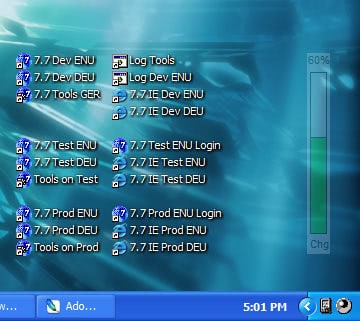 Update: If you are using Windows Vista or an even newer version of the Windows operating system, you may want to try BattStatt instead which displays the notebook's battery status on those systems as well.