Many users have some kind of sequence they perform every time they boot into their operating system. They start their favorite applications using shortcuts, the start menu or an application launcher. But no matter which way they choose to do it, they always have to click or press keys several times until all the programs have been started on the system . I usually load a web browser, an email client and a feed reader at the beginning with additional programs following minutes later.

What if you could bundle applications together so that one click - one execution - will open them all. Lacuna Launcher is a contribution to Donation Coder's NANY 2009 challenge. What does it do? The portable software will launch all applications that are specified in a text document, so that you only have to launch that program to load all the programs listed here.

Unzipping the software will reveal the application itself and a text document that contains a link to Notepad. This is being used as an example and can be modified accordingly. Just place one application per line including its full path in the text document. You can also point the application to shortcuts in case you want to launch applications with startup parameters. 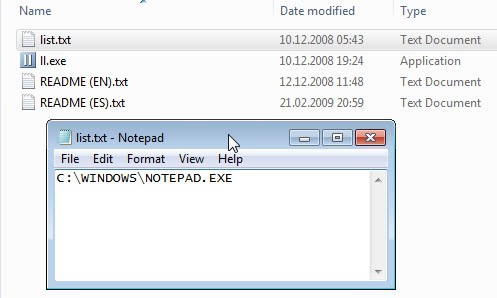 There is also the possibility to start Lacuna Launcher with startup parameters. You can use it to launch application groups by pointing each shortcut to a different text document on the computer. The shortcut makes use of the two optional parameters delay and pause. Delay specifies the time in seconds before the first application will be started while pause defines the idle time between the application launches.