Something strange happened today. Deleting a Firefox bookmark in the bookmarks toolbar or in the bookmarks folder removed that entry from Firefox. It did however reappear after a restart of the browser which was puzzling and annoying as it was not possible to remove old bookmarks from the computer system using the default way.

The best way to start the analysis of the issue is to create a backup of the Firefox 3 bookmarks file to be on the save side. A quick search on the Internet suggested to delete the files places.sqlite and places.sqlite-journal which contains the bookmark information. Deleting them forces Firefox to rebuild the bookmarks from the last backup. The best option is to simply move them from the profile folder into another folder for safety purposes instead of deleting them outright.

Firefox did recreate both files but it did not solve the problem. It was still not possible to delete bookmarks permanently. Next option was to remove both the files and the bookmark backups so that Firefox could not recreate the bookmarks and would have to start with a new blank bookmarks file. 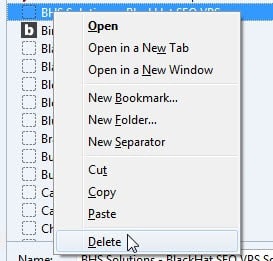 This includes deleting or moving the folder bookmarkbackups and the bookmarks.xxx files in the Firefox profile folder.

A restart of Firefox revealed that all bookmarks were finally gone. It was also possible to delete and move the default bookmarks in Firefox. The last step was to import the bookmarks from the backup that was created at the beginning and move them into their correct places again.

A test to delete and move those imported bookmarks was positive and solved the issue of being not able to delete Firefox 3 bookmarks.