Animated gifs have a bad reputation on the Internet which stems from the early days. There was a time back then when the Internet was new that animated gifs were considered a wonderful addition to many websites. Those blinking irritating websites died off long ago with only some remaining but usually abandoned by their webmasters.

There are many applications out there that can turn images into animated gifs. One of those applications is Gifted Motion. The Java application runs on Linux, Windows and Macintosh operating systems. It can create animated gifs from png, jpg, gif or bmp images.

The whole process is split up into three parts. Images are loaded into the application in the first part. The second part orders those images by adjusting the frames. Once that has been done a new animated gif will be created in step 3 and saved on the computer. 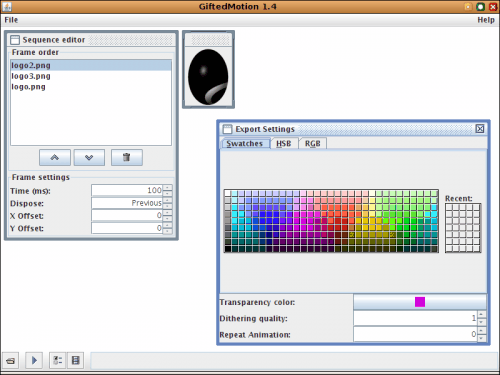 The animated gif editor is completely portable. It requires Java to be installed on the computer system which is the only requirement of the program.

Update: The developer has made available the source code of the program on the website as well. As far as the program goes, it is still working well on the latest versions of the Windows operating system.

One question that came up was about how to use the program to create an animated gif out of a video clip or movie sequence. This unfortunately requires more preparation. One option would be to create screenshots of the video or movie, and use those to create the animated gifs. You can for instance use a program like VLC Media Player for that which can take snapshots of videos it is playing, or create screenshots manually in the operating system instead. This is not optimal but since it is not possible to add videos directly to the animated gif editor, it is your best option.