Video analysis is an area that we have not covered before here at Ghacks. Kinovea is an Open Source video analysis software for coaches, athletes and medical professionals. It can be used by anyone else obviously since it is freely available for download at the program's homepage. It can be used to analyze virtually anything from Wii Fit performances to the performance of professional athletes.

You can load one or two movies into the application to analyze them. Most features can be used to analyze the movement of athletes or objects. A set of tools has been designed to help you in the analysis like manipulating the playback speed between 2% and 200% or comparing two videos of the same scene from different angles.

Other features include a magnifier, 3D plane, image adjustments, comments, chronometers, trajectory analysis and saving a sequence as images. 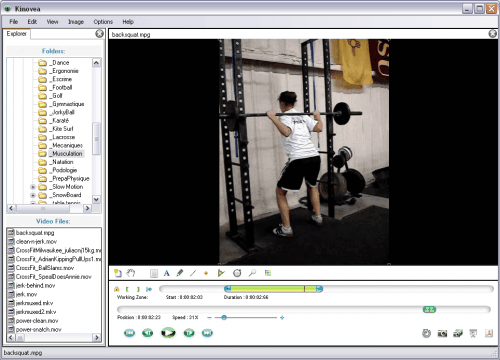 Kinovea is a feature rich video analysis software. New features are constantly added by its developers. It requires the Microsoft .net Framework 2.0 or higher to run properly.

The latest version of the program has a size of 16 Megabytes and offers an interface that has been localized into 16 different languages. The core functionality remains the same however. You can still load one or two videos into the application to watch what's happening on the screen. The program supports a wide variety of input formats, from flv and avi to mkv and mpeg videos.

Images are displayed in their file and folder structure on the left sidebar, and as video thumbnails on the main pane. You can switch between one and two video mode easily using buttons displayed at the top of the window. What makes the two video mode special is that you get to control each video screen individually, but also controls to control both videos at the same time which is excellent to make sure they both run in sync.

The program offers a lot of analysis related features, from the ability to track items manually or semi-automatically to synchronization on common events, time display adjustments and direct zoom modes.

If you are looking for a video analysis software, this one should fit all the requirements that you need.