Have we come this far already? Desperate times require desperate measures it seems. To impress, one has to be witty. This is especially hard on social networks with millions of other users who want to impress as well.

According to the developers of Generatus their product is ideal for the imaginatively challenged. Generatus is a social network status generator which turns the overly repeated and boring statuses like "Martin is working", "Drinking Coffee" or "Jim is visiting his grandparents" into something witty and original, at least that's what is claimed by the site operators.

Simplicity was probably the main design idea behind Generatus. Males can simply hit the Generate button while females will have to click on the female to generate female statuses (not sure if there is really that much difference to justify that, it is probably used to make use of the right grammatical person in the sentences). It is also possible to use tags to get a status that relates to the selected tags. 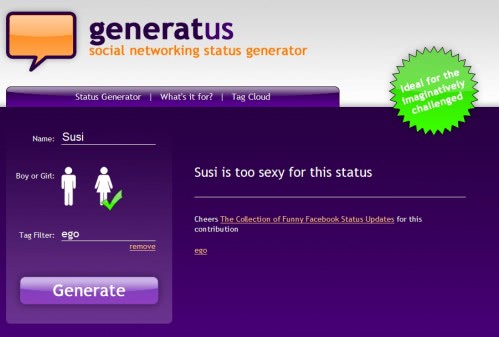 The program generates statuses like "Fred missed winning the lottery by only SIX numbers", "Fred was schizophrenic once, but we're better now!" or "Susi is pushing up daises".

Judging from those "witty" statuses it is probably fair to assume that Generatus aims at the school - college kid fraction of the population.

Still, if you can't come up with a new status message and you are desperate to update it, it may give you a few ideas even if you do not use the full slogan the program spills out after you hit the generate button.

Once it has at least generated one slogan for you, you can click on tags that are displayed on the page to get only status updates that belong to that category.