LimeWire is a popular P2P client which uses the Gnutella network. Unfortunately, it limits the amount of ultrapeers to whom connections can be made, in effect reducing the amount of search results and the number of people from whom downloads can be made. LimeWire only removes these limitations if its Pro version is bought at the cost of $35.

As LimeWire is open-source, several forks of it exist. One of these forks is called FrostWire, a client which appears and works in a similar fashion but removes many limitations of the free version of LimeWire. FrostWire also has some features which LimeWire Pro lacks, such as BitTorrent support.

Unlike LimeWire Pro, FrostWire is completely free to use and download. FrostWire is based on LimeWire's Java engine and as such, it works on OS X, Linux and Windows, providing Java 1.5 or above is installed.

FrostWire can identify files tagged as Creative Commons in searches, much like LimeWire does, it can filter out junk results like LimeWire, supports proxies, works well with iTunes and there's no viruses or spyware with it.

In recent time, additional interesting features have been added to Frostwire. Most notable its own video and audio player as well as Internet Radio support, compatibility with magnet links, options to search SoundCloud and Archive.org, and options to send downloaded files directly to iTunes if the software is installed on the user system as well.

Attention: The installer for Windows comes with third-party offers that are not required to run the application. During a test installation on a Windows 7 system, both the Ask Toolbar and the Opera browser were offered for installation. 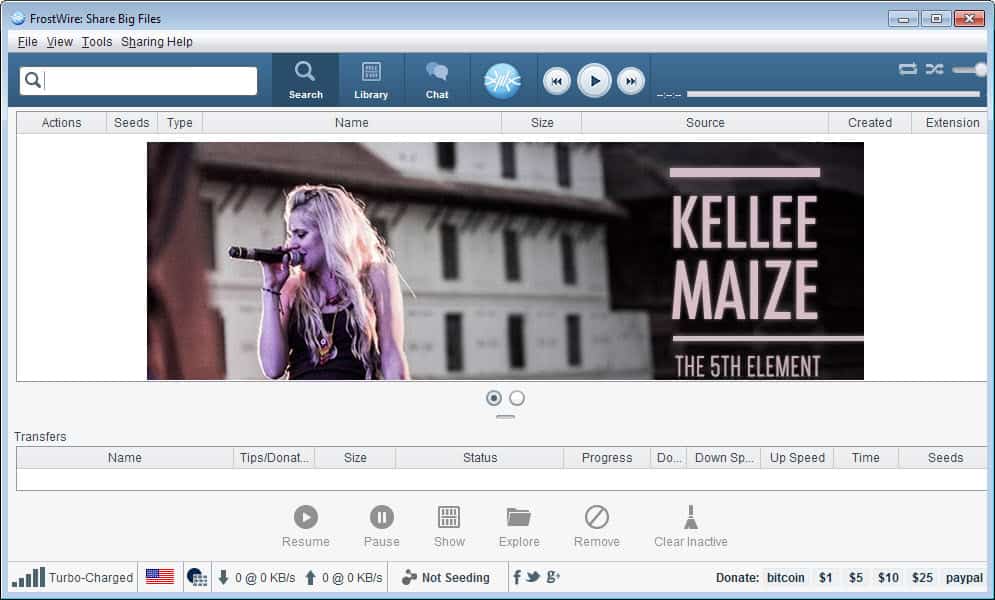 FrostWire is an easy way to save $35 if you really wanted to buy LimeWire Pro. It is also a way to ensure people do not profit from tools which mainly facilitate piracy!

Update: While Limewire has been shut down recently, FrostWire is still up and in full swing. The program is available for major operating systems such as Windows, Mac OS X, Linux distribution such as Ubtuntu and Debian,  as well as Google's Android 2.1+ operating system.

It is recommended to download FrostWire from the official website or one of the official download mirrors to avoid downloading a version that is either asking you to pay or includes malware.

To use the program, either enter a search term and click on search afterwards, or enter an url instead that you want to load. FrostWire will sort results by type automatically, so that you can browse music, video or files easier by clicking on the various filtering options displayed by the application.

All supported sites are searched by default including Archive, YouTube and Soundcloud, as well as about ten torrent indexing services.

You can remove any search engine from the program in the options, for instance to only search on YouTube and Soundcloud but not on any other service supported by FrostWire.

You may want to go through the options at least once, as they offer a lot of preferences and customization settings that may be of interest to you.