The Microsoft .net Framework contains a library of pre-coded functions and a virtual machine that manages code execution.

Properly coded .net applications will perform a check if the required Microsoft .net Framework is installed on the computer before they start the installation or execution. Improperly coded applications on the other hand may not which can lead to error messages, crashes, hangs or the program not starting at all and keeping you in the dark why it won't start up properly.

The concept is not that hard to grasp but it is still confusing as to why so many different .net Framework versions are installed on the computer.

Update: Microsoft has released newer editions in the meantime. Common new versions are the .Net Framework 4.0 and 4.5.1. It is not necessarily the case anymore that older versions are automatically installed on the system, which makes the whole support question that more confusing.

That's where the .net Version Detector comes into play. 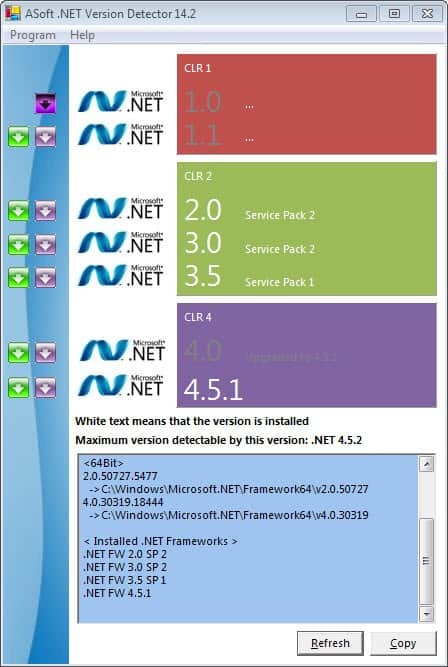 This software makes the detection easier. Experienced users could also look in the System Control Panel and see which versions of the .net Framework are installed there which will give the same information except for the root directory and the download links.

The main advantage of .Net Version Detector is that you can run it and it displays all the information that you need to you. While it won't tell you which framework version you need to run a particular software, you can be sure that it is not a dependency issue if a software does not start properly if you have all versions of the framework installed on your computer.