GCal Popup is an experimental Firefox extension that is compatible with Firefox 1.5 to 3.x. It integrates the Google Calendar service nicely into Firefox by providing a button in the Firefox status bar which, when clicked, will open Google Calendar as an overlay on the current website.

The benefit of using Gcal Popup is that it is no longer required to open Google Calendar in its own tab or window to work with the calendar. It is quicker usually this way as you do not have to switch tabs or load the Google Calendar website if it is not open already.

Every add-on that is added to Mozilla is an experimental add-on at the beginning which basically means that only registered users may download and install the add-on. It is no indication of the quality of an add-on which is important to note.

Google Calendar will be displayed in an overlay that resembles a popup only that it is only visible in the tab where the button was pressed. The website below is shown at the edges and a click on that part will close Google Calendar again and display the website fully. A second click on the status bar button has the same effect. 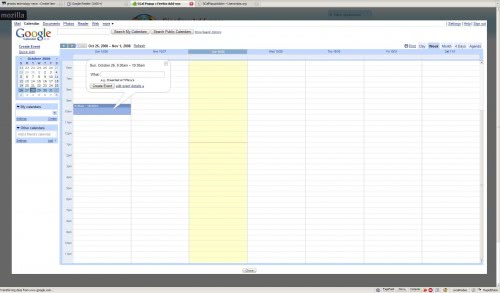 All buttons and functions of Google Calendar can be accessed in the overlay as if it would have been opened in its own tab. That's a great and convenient way to check the calendar or add a new entry to it. The overlay is still available even if the user switches tabs. The links to other Google services will load in a new tab but everything that is related to the Calendar will open just fine in the overlay.

Update: The add-on has been pulled from the Mozilla add-on repository. The extension closed to this is Integrated Google Calendar. It displays a toolbar icon that you can click on to display the calendar information in an overlay as well.