Do We Really Need A Software To Rename System Icons?

Desktop Renamer is a lightweight software that can rename or reset the names of the Windows Recycle Bin, My Computer, My Documents and My Network Places.

The software provides a graphical user interface for renaming those four system icons of the Windows operating system.

The main advantage that the software offers over renaming these shortcuts manually is convenience as you don't have to browse and edit Registry keys to do that.

Probably the most common way to rename the folders, there are more by the way, is to do it directly in the Windows Registry. The advantage of the approach is that you don't need to download and run third-party software for that, the disadvantage that you need to know the path and names of the keys you need to change for that, and that you are editing the Registry directly. 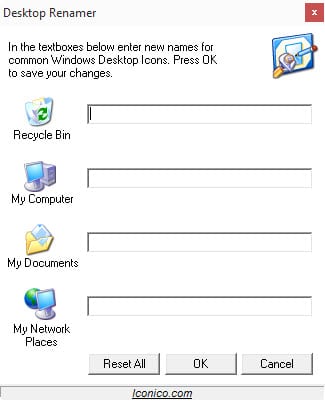 To rename the system icons open the Windows Registry editor with the shortcut Windows-R, typing regedit and hitting enter. You may need to confirm an UAC prompt first depending on which version of Windows you are running and the system's security settings.

The Registry path you need to navigate to using the sidebar is HKEY_CURRENT_USER\Software\Microsoft\Windows\ShellNoRoam\MUICache.

You will find many entries under that Registry path and need to scroll down a bit until you find the desired names. The Data column lists the current name of the entry.

To change an entry simply double-click it and change the Value Data to something else. Changes take effect after rebooting, logging off / on or killing explorer.exe.

Please note that the program and the manual option to edit the Recycle Bin don't work in newer versions of Windows anymore.

It is actually a lot easier to rename these system icons in Windows 7 and newer versions of Windows, as you can right-click the icons directly and select rename from the context menu to do so. 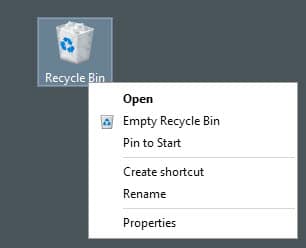 Changes take effect immediately and don't require anything else besides that.

Article Name
Do We Really Need A Software To Rename System Icons?
Description
Find out how to rename system shortcuts such as the Recycle Bin in all versions of the Windows operating system.
Author
Martin Brinkmann
Advertisement