FlashOffliner is a starter and central management application for flash games that have been downloaded to the computer. The software program ships with a few example flash games that can be used to check the program's functionality but it requires that the user knows how to download flash games from various web games portals.

While that is not that difficult it could be a problem for inexperienced users. Flash games can usually be found in the browser's Internet cache. There are also many programs and browser plugins that can download them right away.

Once the flash games are stored on the computer system's hard drive they can be added to FlashOffliner. A click on Create New FlashOffliner Package opens a windows that might confuse some users at the beginning. 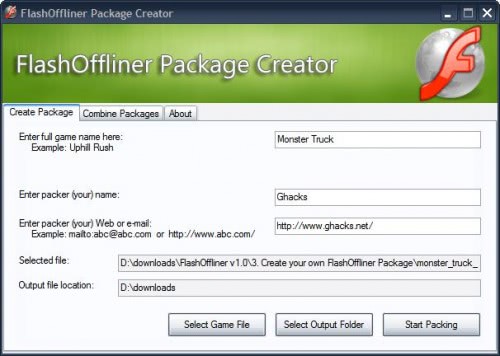 The whole process of adding web games to FlashOffliner can be broken down into two steps. The user picks a swf files in step one from the hard drive that he wants to add and selects a destination for that file in the second step. It is a good idea to store all web games in the same folder to be able to keep an overview of the games. 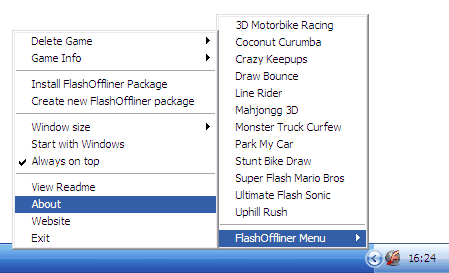 Once a web game has been converted into the FlashOffliner format it has to be added to the application. This is done by clicking on the Install FlashOffliner Package link. The user simply has to pick the file that he just converted from his hard drive.

Every game that has been added this way can then be started from the system tray. One interesting feature is the option to set the game size. Available sizes range from 400x300 to fullscreen.

The advantage of using FlashOffliner over executing the flash games separately is twofold. The application provides easier access to the games from the Windows system tray. It also offers the option to set the window size of the web game.

Update: The homepage of the program is no longer available. You can download the latest working version of the application from download portals such as Brothersoft.