Rumors have been filling forums, blogs and websites that Google was working on a browser to compete with Microsoft on yet another level. Those rumors never ceased completely in the last three years or so and today those rumors seem to have gone over into a semi-official announcement of Google Chrome.

Google sent out a 38-paged comic book illustrated by Scott McCloud to selected individuals which is entitled Google Chrome - Behind the Open Source browser project. The complete comic is available on the Google Blogoscoped website. The comic is showing real Google employees and their thoughts and ideas as well as functions of the browser project.

It begins by outlining the basic concepts of a browser as Google sees it. A browser should be stable, a lot faster, more secure, clean, simple, efficient and Open Source. Google Chrome will make use of multiple processes which means that each tab is rendered separately which includes JavaScript. This means that if one process in one tab crashes because of a bug then only this tab will go down but the rest of the browser will remain stable. Microsoft introduced that feature in Internet Explorer 8 as well.

One of the most interesting features of Google Chrome is a task manager like application for the browser that displays the memory usage of each tab and detailed information for each tab as well which makes it easy to identify the resource that is using up most of the memory. 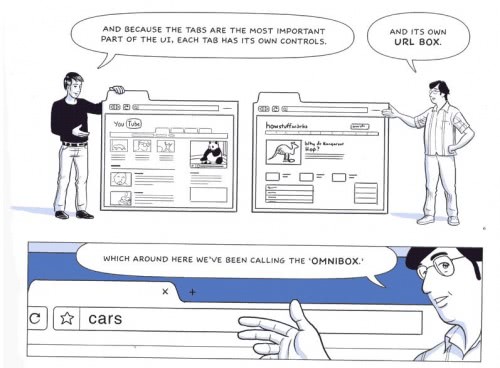 A V8 Javascript engine was created for Google Chrome which promises a performance boost over current JavaScript engines while being memory efficient using better garbage collection. The address bar is called Omnibox in Google Chrome and each tab will use its Omnibox which can do anything the Firefox Awesome Bar can do. It will support intelligent unobtrusive autocomplete and capture search boxes from Internet sites locally if they are used.

Speaking about creating a new tab. Just yesterday I mentioned a Firefox extension that would open an individual website instead of a blank page. Google Chrome makes use of the same concept by displaying the nine most visited websites plus searches on those pages. 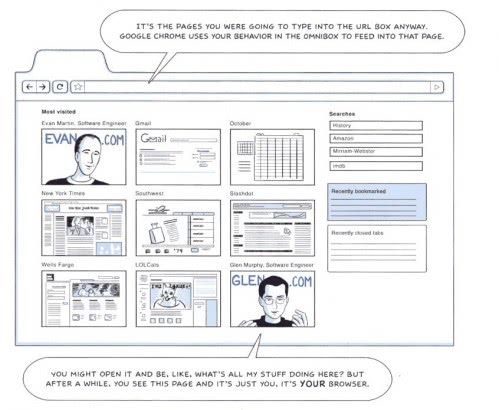 Google Chrome will make use of a privacy function just like Microsoft's InPrivat feature in Internet Explorer 8 and sandboxing is introduced to protect the system.

There is so much on this 38 pages. It is obvious that the Google Chrome development team took a look at Internet Explorer, Firefox and Opera borrowing any good ideas that those browser came up with and added their ideas to the mix. This could be a huge thing.

The browser will be available at google.com/chrome which currently displays a 404 error.

Article Name
Google Enters The Browser Market With Google Chrome
Description
Google announced Google Chrome, a web browser that it plans to launch in the near future by highlighting its core features using a comic strip.
Author
Martin Brinkmann
Advertisement