A Flickr user can decided to protect the photos uploaded to the site, which has the effect that the a user who is trying to download a protected photo will end up with a gif called spaceball.gif instead of the real image. I've already shown how it is possible to avoid saving spaceball.gif images at Flickr. The method made use of the fact that the real location of the photo is referenced in the source code.

It's not everyone's favorite to crawl through source codes and I would like to introduce an easier way to achieve the same effect. I only tested it with Firefox 2 and Firefox 3, can't really comment if it is also working in other web browsers (chance is it will).

All you need to do is make use of the Page Info menu that can be accessed by right-clicking on the page with the image. Page Info has a media tab that lists all media files on that page including, yes you guessed that one right, the image that is being displayed on that page. 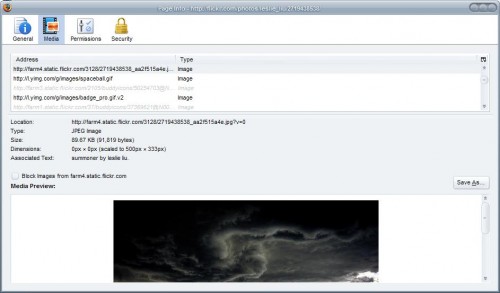 All that's left to be done is to find the correct image and click on the Save As button. Now, before someone (again) comes along and tells me that this is stealing I would like to inform that person that the image gets downloaded automatically by the browser cache as well and that it therefor already exists on the computer.

If users want to protect their Flickr photos they should either make them private, stop uploading them at all or upload them in a resolution that they are comfortable with that it gets downloaded.

Update:Â  The method still works in recent versions of the Firefox web browser. It has been tested in Firefox 13 at the time of writing, and it is likely that future versions of the browser will continue to support it.