Test Your Computer With Heavy Load

It is always a good idea to stress test a new computer or new hardware to make sure that it is fully functionally and without errors. Hardware that is not working properly can lead to all kind of problems such as system crashes, data loss and even hardware defects.

Heavy Load is putting the system and its hardware to the test including CPU, Memory and Hard Drives."HeavyLoad writes a large test-file to the temp folder, it allocates physical and virtual memory and it draws patterns in its window."

A chart is displaying CPU usage and free memory during the tests but the only indication that the tests have not been successful would be a crash of either the application or the system. The user has the choice to start only selected tests by enabling icons on top of the program window. 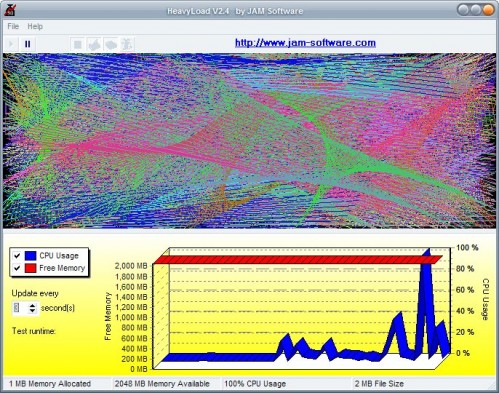 It's possible for instance to only stress the CPU to find out if it is working properly or the cause of problems. Experienced users prefer to use specialized applications like MemTest to test the memory of the computer instead.