Open It Online is a Firefox extensions that is compatible with Firefox 2 and Firefox 3 and offering the user a way to open and edit documents directly online. The benefit of this approach is that users does not need to have specific tools installed on the system they are working on to view and edit the files on the computer, all that is needed is Firefox and this extension.

The add-on can currently loads most Office file types including doc, xls, ppt but also sxw, csv, rtd and several image formats. Don't worry, it does not install an Office suite as a Firefox add-on. It makes use of various online services like Zoho or Google Docs that can display and edit the aforementioned file types.

The add-on displays a configuration dialog after installation that gives you the option to pick one out of four services for each file type. The default service for every file type is the Zoho Viewer which can be changed to Zoho Writer, Google Docs and Thinkfree Viewer. 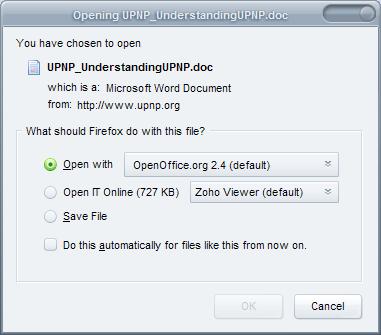 The add-on is basically redirecting the file download to one of the online services so that it can be viewed and edited there. That's definitely a clever concept.

Update: The extension has been updated recently, it now supports Google Apps, View Docs Online and Vuzit but not longer the Thinkfree Viewer. As far as document support goes, it now supports the pdf format and the 2007 Microsoft Office XML file formats on top of the formats that it supported previously.

The main advantage of Open IT Online is that you can open any linked document or file that is supported by the services on the Internet to view or edit it right on the web even if no compatible viewer is installed on the system itself.