The best games every Tuesday that I have found and written about at my games website Take 9. I do like to play games every now and then and have discovered many throughout the years. At least one game is reviewed every day at Take 9. All games are free of course and either browser games that can be instantly played or free games that can be downloaded and played on the local computer.

This week was strongly centered around Japanese arcade shooters and puzzle games. If you love those you find some very innovative and interesting games that are definitely fun to play.

Lets start with the Japanese arcade shooters and go from there. I want to mention two of them in this recap: Titanion which is a vertically scrolling time based shooter and Tumiki Fighters which scrolls horizontally. Both have wonderful graphics and an interesting game play. Be prepared for lots of bullets as well.

I reviewed Cookie Cruncher today which is a remake of Yoshi's Cookies, an addictive puzzle game for the SNES back in the good old days. Something for a puzzle-addicted girlfriend.

Kong on the other hand is a mix of Unreal Tournament and Quake in 2D. It offers multiplayer modes like Deathmatch and Capture the Flag with great graphics and interesting weapons. 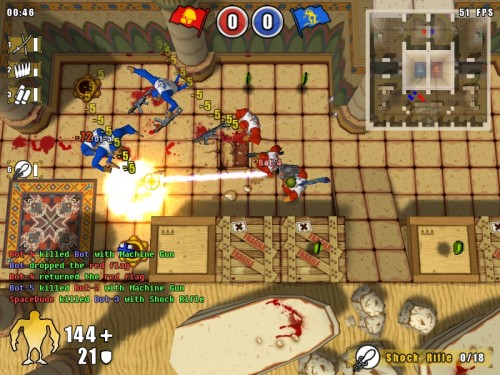 Surprisingly though all games can be downloaded and played on Windows PCs. Have fun, lots of and remember to bookmark Take 9 as well to get your daily share of interesting games.

Update: We have added links to the games - with the exception of Kong - to the article again. Links point to the developer websites where all games can be downloaded. Note that you may need to run some of the games in compatibility mode depending on your version of Windows. This can be set in the properties of the file.