With the much anticipated release of Firefox 3, Mozilla also wants to set a Guiness Record of the "most downloaded software in 24 hours". I think that is put just plain stupidly, but nevertheless, if you're a Firefox fan, why not? You can visit the Spread Firefox site and offer your pledge to download Firefox 3 on the day of its release.

The actual date will be posted on the site itself soon, so you can schedule it to make sure you make good on your pledge. The site features a cool map which shows pledges according to country, I am proud to say my country, Hungary is the best in its region, central Europe, it is doing especially well regarding population. Yay!

If you have a blog or a website they have some cool banners and other ideas to promote the event, and since Firefox has done so much for the web, I at least urge everyone to help out. This is the first actual attempt at this, so even with 1 download they will create a World Record, but they set out for 5 million, which is no small number. Firefox 2 was downloaded about 1.5 million times on its release date, so I think 5 million is a but pushing it, but definitely possible, go Mozilla!

Update: The Spread Firefox website is no longer available. It redirects users to the new Firefox Affiliates website where webmasters and users can sign up for buttons and referral links to spread the word about Firefox. A leaderboard is available that highlights how successful individuals and companies are in their attempt to spread Firefox.

Mozilla achieved the world record it was hoping for in the event. Firefox was downloaded by more than 8 million users in the first 24 hours after release. 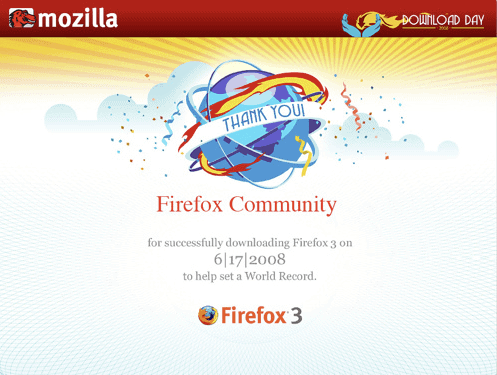 The company toped that with the release of Firefox 4 when more than 8.75 million times downloaded the browser release on the second day, with 7.1 million having already downloaded it on its first day. It is interesting to note in this regard that Microsoft's release of Internet Explorer in the same year only accumulated 2.4 million downloads.