Backups are important. I'm not only saying this because of the three dedicated servers that I'm running on the Internet that host my websites which earn the money I'm living from. No, it's also important at home. The importance depends mainly on how the computer is used. If you just play some games and surf the web you probably do not need to fear data loss. If you are writing a book for the last year you should make sure you create regular backups to avoid loosing all of your work of the last twelve months.

One interesting aspect of Ace Backup is the opportunity to launch applications before and after a backup job. This would make it possible to run a disk cleaner after backup for instance or an application to shutdown the computer. 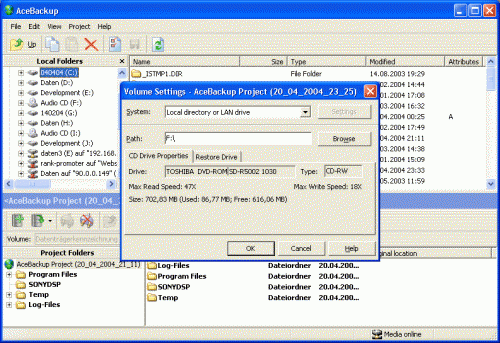 Multiple backup locations can be managed independently from each other or synchronized. Lastly the Explorer integration makes it relatively easy to add new files and folders to a project.

Update: The Ace Backup developers have recently released version 3 of the application which is now fully compatible with Windows Vista and Windows 7. The program interface has been redesigned to make it more intuitive to use. The program can now backup files that are in use, supports SMTP servers for sending notifications and can store backups on network drives.

You may also be interested in our overview of free backup software for the Windows operating system which lists a selection of the best data backup programs for Windows.