Radar Sync relies on a database that contains information about applications and drivers which means that it will not detect all programs and devices on a system. The scan itself is well done and catapults Radar Sync to the top of the programs that check for updates. The scan is quick and the button to download all listed updates comes in very handy. 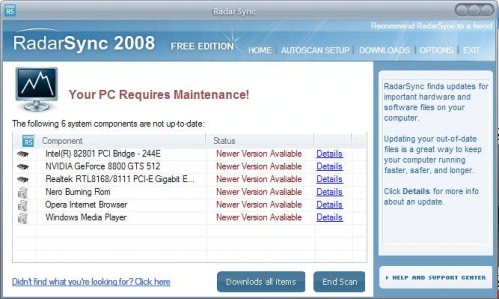 The updates can be installed right from the application after downloading them. A click on Actions > Install Update is normally sufficient to install the update. Radar Sync recommends to create a system restore point before installing applications which can be initiated right from the recommendation dialog.

One download failed on my system and a click on the Actions > Get More Info link allowed me to report a bad download link. Downloads are directly from the manufacturers and developers websites which reduces the chance that a download contains malicious files.

I cannot really say much about the detection database because of my new computer. Six updates does not look like much but I do not have that many applications installed yet. One last thing that bothered me was that it told me that there was a new version of Opera. I have the latest Opera 9.5 beta installed and it told me that the version 9.27 was the latest. This means that it did not detect that my Opera version was newer than the one recommended.

Previous Post: « Do not move Special Folders in Windows to root
Next Post: « Multi-Touch support in Windows 7