Why my taskbar is on the right side of the screen - gHacks Tech News
ghacks.net

Why my taskbar is on the right side of the screen

I did that for a purpose of course, not to train my brain or as a test on how I handle new situations.Moving the taskbar to the side, either left or right is possible, increases the space that you have available for Windows that are displayed on it before the grouping feature kicks in. If you disabled the grouping feature, you may have noticed that window titles become unreadable quickly after opening a couple of programs and folders on your system. While you can sometimes use the icon to identify a program or folder, it quickly becomes a problem if multiple instances of the same program are open as you can't identify it properly anymore.

I can put roughly 25 minimized windows on the taskbar when it is on the right (or left) side of the screen and all window titles are still readable. Compare that to the ten windows that I can read the titles of when the taskbar is at the bottom of the screen. 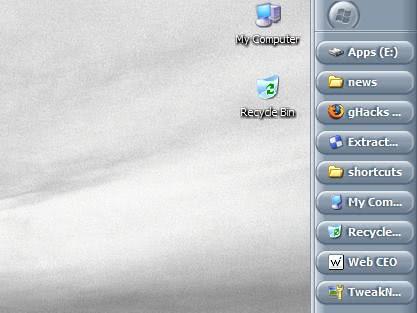 But don't get me wrong. The first days after the change will be hard as you need time to cope with the new location, especially if you never moved the location of the taskbar before on your system. Your mouse cursor may automatically go to the bottom of the screen in the first days for instance as it is almost an automatic move. This may slow you down a bit on the first couple of days, but it should go back to normal after that time. Were is your taskbar located?

Update: Windows 7 and newer versions of Windows shipped with improvements that allow you to add lots of program icons to the taskbar. It is for instance possible to always combine program windows and display them only as icons. This means that you can place lots of programs on the taskbar without running into space constraints.

Article Name
Why my taskbar is on the right side of the screen
Description
I explain why I have moved the Windows Taskbar to the right of the screen instead of keeping it at its default position at the bottom of it.
Author
Martin Brinkmann
Advertisement