What's the best way to fight illegal downloads and streams of your tv shows? It could be to offer them for free on an official website. That's probably the same line of thought that the creators of South Park had when they created a website called South Park Studios together with Comedy Central.

The website offers full episodes of all twelve South Park seasons; The best news is that they are freely available for a worldwide audience and not only US viewers. The image quality of the South Park stream is excellent, the actual resolution of the picture is 640x480 which is almost double of what Youtube is currently offering.

They seem to run a script that is checking for the country of the viewer but it seems like it is being used for advertisement and not to block viewers from viewing the episodes. 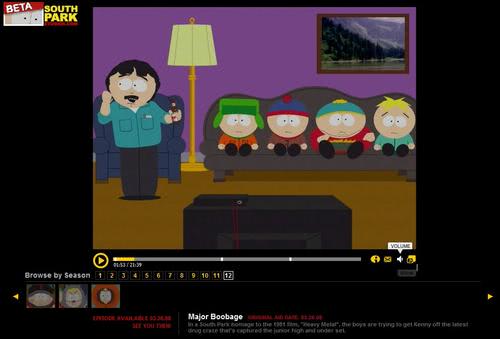 The language of the South Park episodes is obviously English. Some of the newest episodes can't be streamed just yet and you receive a notification when they become available. South Park Studios is an excellent way to watch South Park online. I did add it to my bookmarks.

Update: The contents are limited to the US again but the creators have made available the shows at least for some countries on localized sites where they can be watched in English or the local language. This is for instance the case for Germany where you can watch all Southpark episodes in German or English.

Note that new episodes are added to the sites whenever they air on national TV. You currently find all sixteen Southpark episodes available on the sites. Note that advertisement is displayed before the videos start to play. This is not a big issue though considering that you get to watch all the episodes for free on the site.