Microsoft has released the standalone versions of the Windows Vista Service Pack 1 and Service Pack 2 for 32-bit and 64-bit systems.

Standalone in this regard means that the update is downloaded to a local system from where it can be executed or distributed. Standalone packs are available as executable files or ISO images that can be burned to CD or DVD for distribution.

The advantage over downloading the service pack updates via Microsoft's Windows Update service is that they only need to be downloaded once.

If you maintain a network with x computer systems, you would have to download the updates x times if Windows Update is used for that. 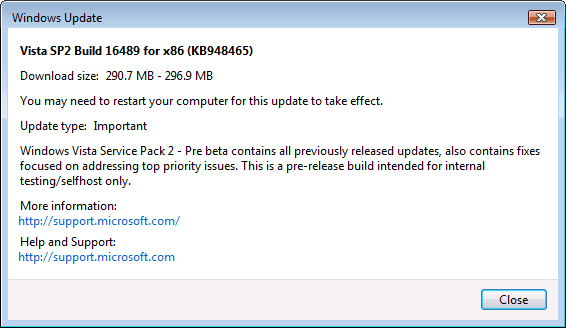 If you are downloading the standalone files, you can run the update as soon as the file has been downloaded to your system.

The ISO images on the other hand need to be mounted, extracted, or burned to CD or DVD first before they can be used for that.

Clean up files after the installation of Windows Vista Service Packs - You can remove files that have been updated and are no longer needed to free up disk space on the system.

Windows Vista Service Pack guide for Professionals - A document for professionals that provides in-depth information about the service pack.