A picture comparing Apple's iPhone with the iPhone Nano which is supposed to come out in October 2008 was published on Flickr. The iPhone Nano, as usual, will be smaller than it's first generation predecessor but also cheaper retailing for a price of $300 or less.

The iPhone Nano will have a smaller 2,75" screen compared to the 3,5" screen of the iPhone Classic. According to this comparison it will not offer Internet access which is a huge drawback if you ask me. It is still multi-touch and combines a phone and music player in one device but will only ship with either 4 or 8 Gigabytes of Ram compared to the 8 or 16 Gigabytes of the classic iPhone.

I personally can't see that the iPhone Nano will be highly successfully especially if you consider that it will not have Internet and less storage. Do you think it is a wise move to remove Internet from the iPod Nano? Let me know. 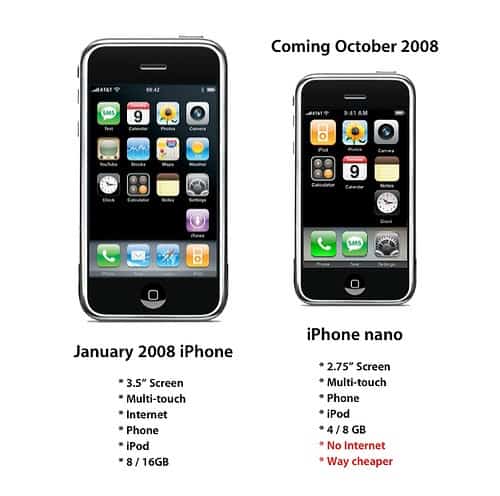 Update: It is now 2012 and the iPhone Nano has not been released until now. Rumors have come up every now and then that Apple may be about to release the Nano version of its popular mobile phone, but those rumors until now have always been incorrect.

Apple may however still be working on the device, for instance to push it out in emerging markets and to consumers who do not want or need Internet on their mobile phone. The Internet mobile boom on the other hand may be something that speaks against it, and it is very likely that the device will ship with Internet enabled after all. This would not only mean better connectivity for its users, but also more profit for Apple considering that users make use of the company's app store to install new applications.

Martin Brinkmann is a journalist from Germany who founded Ghacks Technology News Back in 2005. He is passionate about all things tech and knows the Internet and computers like the back of his hand. You can follow Martin on Facebook or Twitter
View all posts by Martin Brinkmann →
Previous Post: « Put Wikipedia on your iPod
Next Post: Rumor: Apple launching Record Label with Jay-Z »